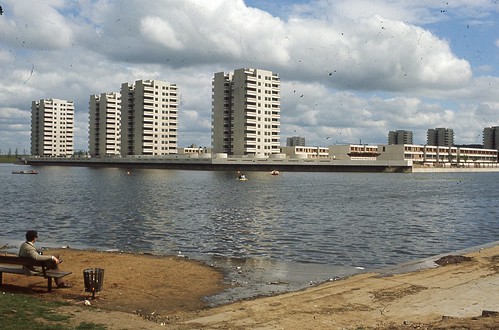 Dirty Modern Scoundrel has highlighted the JR James Archive on Flickr. James was Professor of Town and Regional Planning and Chief Planner at the Ministry of Housing and Local Government and took a huge amount of photos of British architecture, and by the looks of things had a particular interest in brutalist architecture. The collection, brought together by the University of Sheffield, has loads of photos, maps and plans and is a very good way to lose a few hours as you work your way through this chronicle of post-war British town planning. END_OF_DOCUMENT_TOKEN_TO_BE_REPLACED

1. Where did it all go wrong? END_OF_DOCUMENT_TOKEN_TO_BE_REPLACED

I could never motivate myself to write a diary. I’d start in January, a little late, never on the 1st. I might backdate a few entries. And then I’d stop after a week or so. Maybe because there was nothing interesting to write. Nothing interesting happens anyway, and even less happens in early January. Maybe it had yet to hardwire itself into my routine. What I wrote was dull, or self-absorbed, or embarrassing. Who would want to read it? Who would read it? Was I just going to leave my diary hanging around, or was I planning on there being some sort of posthumous release after a long and yet-to-be-decided career? END_OF_DOCUMENT_TOKEN_TO_BE_REPLACED

It is a point that has made before, and has no doubt been made in a more eloquent way, but the internet is full of people presenting something that someone else has actually produced. Much of what the internet churns out is essentially repeats of something that has already been churned out on the internet. I’m not getting on my high horse here, it is second nature for most of us. We share things on Facebook. We retweet. We reblog on Tumblr and WordPress. We embed videos and songs and photos from other people.

END_OF_DOCUMENT_TOKEN_TO_BE_REPLACED

As I think this WordPress theme is rather pretty and well-suited to big, pretty pictures, I thought I’d intermittently share some of the finest Creative Commons images I can get my mitts on. Keeps the post-rate up too, eh? I’d take some photos myself, but they are generally awful, unless I use one of those Polaroid app-things that makes even the worst photo look like a beautiful, wistful memory.

Image from the Swedish National Heritage Board, via Flickr