Tending my own garden 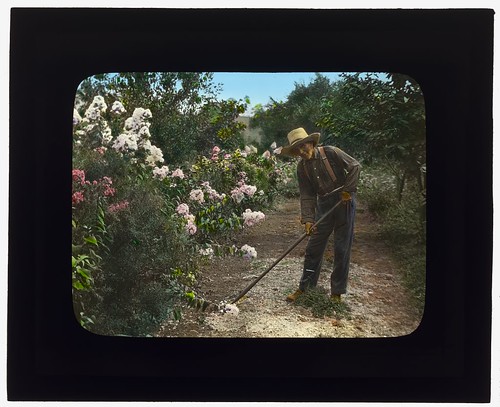 We’ve been living in our current place for a little over a year now. And over the past few months we’ve edged closer to getting the house sorted. It has been rewired, re-floored, re-carpeted, re-decorated, re-most things. We’ve found homes for stuff that never had a home. The place feels very much like home now, somewhere I’m reluctant to leave each morning and eager to return to every evening.

And with our home looking good I’ve had a bit more time to turn to our garden. It isn’t the biggest and certainly isn’t the fanciest, but it is a pretty charming little space. The garden is south-facing, so gets plenty of sun, when the sun appears at least. Beyond the garden is allotments and then a park, so it is relatively peaceful, providing the neighbours either side are out – another tale for another time. We have a small lawn that stretches towards the end of the garden. To one side of the lawn is a path, and to the side of the path a flowerbed that runs the length of the garden. At the end of the garden is a concrete standing area and then a garage. As I said, not too fancy. But it is ours.

I’ve never really been much of a gardener. Too many memories of boring Sunday afternoons as a kid being dragged around garden centres, quietly hoping there would be some sort of ice cream or similar at the end, keeping an eagle-eye out for a Wall’s or Lyons Maid sign. In adult life gardening has never been a priority, plus I have never really had a nice space to call my own, until now.

I’m very much an amateur. I can hardly name the plants and flowers. I’m not bad at naming the herbs, but beyond that I have trouble, even for the plants that still have the little plastic identifiers stuck in the earth next to them. I’m learning, picking up tips from family about how to prune things, what to cut back, what to leave, what to pull out. I’ve started listening to Gardeners’ Question Time. I’ve even understood bits of it.

Some plants are thriving, some less so. We seem to have loads of strawberry plants this year. I suspect it is because I neglected the couple we had last summer, so the fruit ended up falling and seeding. One rose I pruned is on the road to looking amazing. Another one looks like it is about to die.

I’ve become vaguely obsessed with our lawn. I guess this moment comes to many men of a certain age. Maybe it has hit me early. I want to sort out the bald patches and the areas full of dead, straw-like grass. It is not going that well, but I think maybe I’m just impatient.

I’ve begun feeling happy when it rains. One less job to do. Gives the garden a better chance.

There is something soothing and restorative about spending time in the garden, tinkering, experimenting. The tasks are involved enough to help you forget a bad week at work, but not so involved that you can’t free up some head-space for some more productive or fun thinking. By day I sit at a desk and stare at a screen. It feels good to be outside doing something practical, physical. The garden is small enough not to be exhausting or soul-destroying, yet there is enough to do that I still get that kind-of exercise buzz, feel like I’ve earned a bottle of beer afterwards.

I don’t think we’ll ever have a perfect, pristine garden, but it is definitely rewarding working towards creating an outdoor space that is welcoming, relaxing and satisfying. Or at least to have a space that isn’t over-run with weeds. But in a way the end result isn’t the point. The process feels like the fun part – a tiny escape from the mundane day-to-day, a vague contact with the natural world, a place to think, or not think, whatever feels right that particular day. A place to work out who I am, or might be, a place to accept who I am, or might be, a place to define me as one of those odd types staring at their lawn for hours, or someone who likes to have a go but doesn’t mind if they don’t reach perfection, or anything close.

4 Comments to “Tending my own garden”