Riding the bus through Slade Green at dawn

Over the past few months I’ve been getting up rather early on a Saturday morning and taking the bus to my local supermarket. The bus takes a rather circuitous journey, but as it is door-to-door I don’t mind too much. Said route takes me through Slade Green. Slade Green has a rather shabby reputation. Nobody really aspires to live there. The town’s location, on the edge of the Thames, surrounded my marshland, makes it feel pretty isolated. There is no passing traffic, apart from buses with idiosyncratic routes.

Dawn is a beautiful time of day. It is particularly good in winter, as you don’t have to get up so early to appreciate it. The sky progresses through a series of greys, blues, yellows. As the bus moves from residential streets to industrial units and car lots the sky opens up. There is a quiet, eerie majesty to it. Even a forgotten town like this one feels a little bit cinematic, makes you want to listen to certain types of music through your earphones, makes you want to soundtrack the experience. Give it meaning.

There is evidence of people living in Slade Green for centuries. There are still a few people who call it Slades Green. It seems like the town has been known by series of variants in its name. Old names for towns feels like an ancient thing, yet the train station was called Slades Green well into the 1950s. I remember an old guy I knew in my early 20s who always called it Slades Green. I thought he was just getting the place-name wrong. What did I know.

There is a large train depot there, surrounded by old railway cottages. They give those roads an almost Northern feel. These homes are unlike any others in nearby towns. There is the social club, that always has a few people sitting in it having a chat, even at 7.30 in the morning. I guess they are staff, but I couldn’t say for sure. The greasy spoon caff is open, someone sat in there nursing a tea. One pub has been converted into flats. One is boarded up. One is still going, offering sport, free pizza, music, whatever entertainment to keep people coming.

There are vaguely overgrown playing fields. Football goals bent and warped. The odd dog walker. The fields don’t look too different to the marshes some houses back on to. 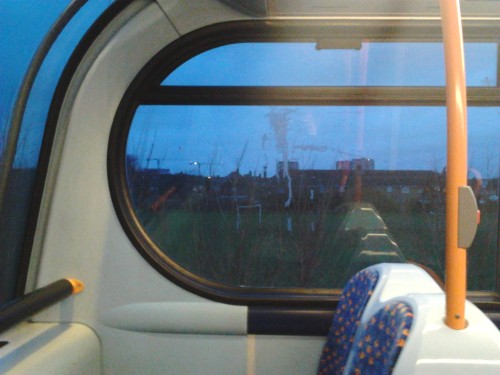 The bus makes it way out of the town. There are some new-build homes, with that generic design that aims at affordable opulence and fails miserably. They are followed by warehouses, lock-up units with evangelical churches and building firms and postal sorting offices side by side. At the end of the road is the Thames and a giant wind turbine jutting into the sky.

There is also a yacht club on the river. It doesn’t seem to fit, amongst the industry and marshland, it seems the wrong place for such extravagance. But I guess it is popular, and by the river is a sensible place to have a yacht club, right?

I’ve been dipping in and out of Jean Baudrillard’s book America where, and I’m paraphrasing terribly here, he suggests that to understand a place you shouldn’t live there, or even visit as a tourist, but should drive through it. He sees this as pure travel and the way to get to the essence of a place. I’m not sure I agree, and he was referring to speeding through the desert, not bumping along on an old bus, but I feel like I’ve learnt something from those early morning journeys through the empty twilight streets.

Rather awkward, blurry photos taken by me. The roads need resurfacing, well, that’s my excuse for my shaky camera work.

7 Comments to “Riding the bus through Slade Green at dawn”