A pre-gig drink at BrewDog Camden… 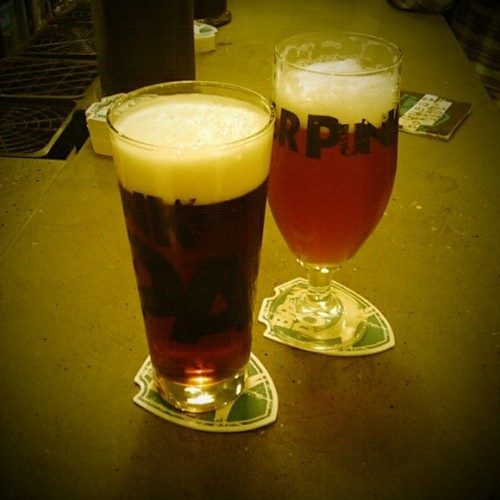 The other week marked my first wedding anniversary – an opportunity to look back on a wonderful day and a wonderful first year of marriage. And my wife, being the awesome wife that she is, bought me a great anniversary present. Two tickets to see The War on Drugs was the perfect present for two reasons. Reason one, Slave Ambient was my record of 2011. Reason two, the tickets were obviously made of paper[1], paper is the symbol of a first wedding anniversary, and so here was a present that was both incredibly thoughtful, and incredibly apt.

So, Tuesday night saw us head out on the town. Now, I’m not used to being out late on a school night so this was both an incredibly exciting prospect and a bit of a worrying one. What if I got really tired when I was out? What if I fell asleep at my desk the next morning? But I threw such pretensions to responsibility out of the window, and went for it. In a sensible way, of course.

The gig was in Camden, we were meeting after work, and pretty much every music venue in London has awful and expensive beer, so it seemed a good idea to head for a pre-gig drink in a half-decent bar. And luckily, the perfect candidate was right around the corner.

I’ve wanted to go to BrewDog Camden since it launched late last year. This is BrewDog’s first bar to open in London and is a showcase not only for their range of beer, but also a wide selection of other craft beer from around the world.

So, it was on course to be my ideal bar. Yet there was a degree of trepidation. BrewDog do court a fair amount of controversy and can be a bit gung ho in their approach. I didn’t particularly want an in-your-face drinking experience. I also worried that the staff might not be entirely approachable. I think there are parallels to be made between craft beer bars and your more elitist record shops[2]. Knowledgeable staff are in a position to either educate the customer, or look down upon them and make the whole experience an intimidating and even humiliating one[3]. Plus there was also the risk that a cool new bar could attract a hipster/annoying crowd. As I have an aversion to the general public anyway, I was worried about the potential clientele…

I needn’t have worried[4]. The bar was sleekly designed, small, but a perfectly welcoming space. However, I think a quiet Tuesday evening was a good time to check it out – I imagine it is pretty difficult to navigate on a weekend. The staff were friendly, happy to answer questions, and ready to offer samples of beer[5]. It also, at least on a Tuesday night, still seems to attract the beer geek crowd[6] and friendly, smiley professionals. The cool set haven’t found out about it just yet. And perhaps craft beer isn’t that cool after all.

Oh, and the beer is fantastic. We started with BrewDog beers, Hops Kill Nazis for me, and a Prototype for my wife. I haven’t got the most sophisticated palate, so I won’t go too beer-taster-heavy on you, but my beer reminded me of many of the Kernel IPAs, with an almost tropical fruity taste amongst all the hops. The Prototype was a little harder to pin down, but seemed to have almost a pine-y or fern-y aroma to it. Second beers were an imported Hop Stoopid for me and a 77 Lager for my wife. The former was super hoppy, as you’d kind of expect, but perhaps a little too syrupy and boozy as it warmed up. The lager was sold to me by the barman as lager as it should be made – and it pretty much lived up to the bill, refreshing, approachable flavours and not a preservative in sight.

All four beers were on draught, as part of a wide selection. Recommendations on glass size were offered, which was really helpful – ranging from pints for the weaker beers, to 2/3 pint glasses, 1/2 pint glasses, 1/3 pint glasses and finally shot glasses for their strongest brews. There were no handpumps but plenty of bottles.

So, essentially something for everyone, and presented in a sensible and reasonably easy to understand way. One issue, however, was the lack of beer under the 5% mark. Clearly BrewDog as a brewery and the bar as a craft beer destination don’t prioritise session beer, but for anyone wanting a less boozy option there wasn’t a whole lot of choice, which was a shame. It would be really interesting to see more craft brewers producing interesting beers with a low ABV and seeing what they can achieve with such limitations. BrewDog have managed it themselves with their Edge beer – I’d have loved to have seen that on tap, but it was not to be.

As the bar filled up it was time to head off for the gig itself. And I’m afraid, dear reader, that will have to wait, as this post is already too long…but stayed tuned for future instalments!
________________________________________
[1] Well, I say “obviously” yet ignore the variety of digital delivery methods for tickets these days – emails, text messages etc. Luckily, there were your proper perforated paper tickets, that can be kept forever. I guess there is a chance that one day they will revamp the anniversary material-stuff list and digitalise it, in which case married couples may well exchange text messages, emails, blog posts, videos etc. Or it may go up in memory size – a 5MB gift one year, a 10GB the next etc. Although that would be pretty silly.
[2] What ones that are left, that is.
[3] You’ve all seen/read High Fidelity, right?
[4] This could well end up my epitaph. If I’m lucky.
[5] This really should be a given in any bar, but in my experience rarely is. Considering the price of some of the beers this seemed entirely sensible (in order to help customers make an informed decision and not get pissed off with spending a fortune on something they don’t like) and rather generous.
[6] Including your correspondent, obviously.

One Comment to “A pre-gig drink at BrewDog Camden…”