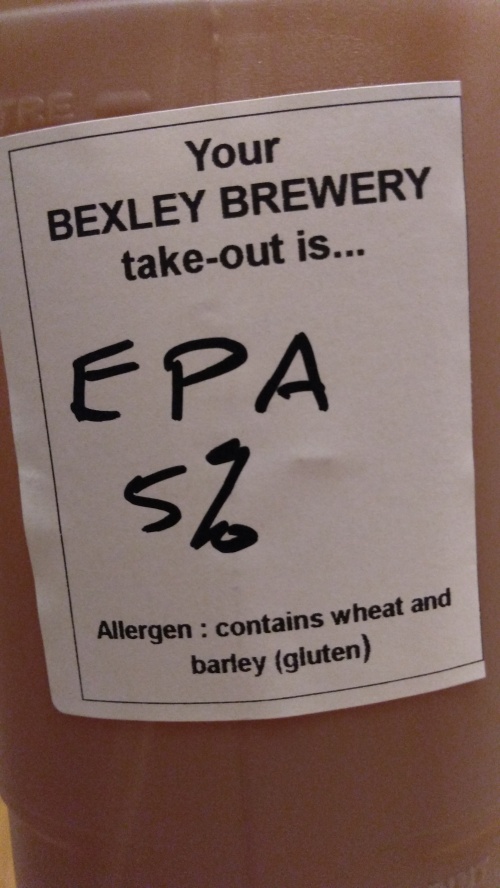 Bexley Brewery‘s Howbury range of beer is a simple idea executed brilliantly. A self-defined “development range” that allows them to try new things, make mistakes, get feedback, identify possible new stalwarts for their core range and more generally offer a bit of variety.

Howbury 6, an English Pale Ale, is their sixth beer in the range, as you might expect from its name. I picked up a takeaway last weekend. I wish I’d picked up more.

The growth in new breweries has led to a lot of beer tasting, well, a little rough around the edges, unfinished. While something interesting might be going on, the various elements don’t always hang together right. And you would expect this from a “Development” beer. And yet Howbury 6 already feels very much like the finished article. No need to go back to the drawing board with this one.

In an age of pale ales that are brash, upfront and the beer equivalent of a punch in the face this beer is nuanced and classy. It wears the 5 per cent ABV lightly. Bexley Brewery have mastered the art of making weaker beer taste more boozy in terms of offering complexity at a low ABV, while making higher strength beers like this one appear less boozy. No treacly, sticky, warming booze here.

Instead there is a gloriously clean pint. The aroma and taste is floral, grassy even, but not so grassy to make you feel like a bout of hayfever is on the cards. It is refreshing to drink a pale ale that isn’t all tropical flavours. There is also a lovely mineral quality to the beer. This is a brewery that cares about getting the water right – the most underappreciated ingredient in beer. The floral, grassy notes accompanied by the minerally taste make this beer feel like a wonderful union of a great pint of Harvey’s Best and a classic Burton Ale. This is an English Pale Ale that is aware of its history.

This is a subtle, balanced beer. And “subtle” and “balanced” could be backhanded compliments in the current hop-heavy, bold-flavoured climate. But something this nuanced, that creeps up on you, that doesn’t betray its strength, is very welcome. This shows the artistry of brewing. This is a brewery making interesting beer without resorting to stunts, tricks or easy ways out. The Howbury range is a constant refining of what works and what doesn’t, which feels like a definition of craft beer that is worth aspiring to, buying into, and ultimately buying.