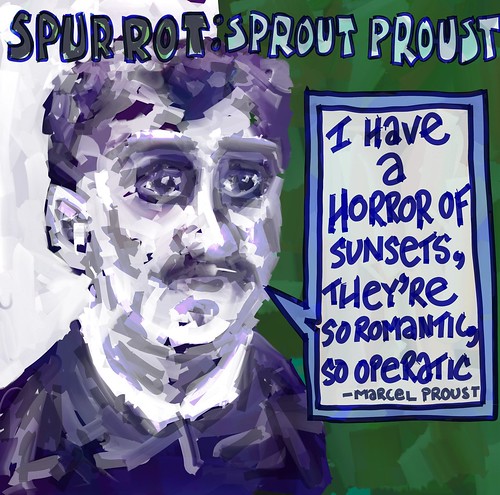 A little over a month ago friend of the blog and my favourite active nom de plume Pizza Cottontail posted a Proust Questionnaire and encouraged his readers to do the same. And so here is my effort. Perhaps you might try this yourself?

I have spent a while thinking about my answers, and thinking too much has made simple questions feel completely unanswerable. In some cases it is hard to come up with something definitive I could happily stand by forever. For other questions the temptation is to be pithy, which almost always results in something not as funny as I’d anticipated. And then sometimes the answer is so obvious I worry it might seem trite. So, I figured I’d just try to answer as I go along. I can always post another one another time.

What is your idea of perfect happiness? Saturdays.

What is your most marked characteristic? I think I’m pretty sensible.

What do you consider your greatest achievement? Achieving some sort of good life.

What is your greatest regret? I perhaps could have been less sensible at times. But then again, I think regrets tie you up in knots anyway. Everything I’ve done has led to this moment in time, and I don’t think I’d want to gamble my current situation by changing anything that went before.

What historical figure do you most identify with? One of those normal people from a census from way back then, identified as “the average male”, if such a person exists.

Who is your favorite hero of fiction? Frank Bascombe. I like that a normal guy can remain fascinating over four books.

What is the trait you most deplore in yourself? I’m pretty crabby at times.

What is the trait you most deplore in others? Contorting weird flights of logic and understanding in order to create and justify their own reality.

What is your biggest extravagance? Good beverages.

On what occasion do you lie? When colleagues ask me “How’s things?”

What is your favorite journey? Any decent train journey, with a good seat and enough time to relax, read and stare out of the window.

What do you consider the most overrated virtue? Mr Cottontail mentions ambition. I reckon he might be right.

Which word or phrases do you most overuse? Caveat gets used too much. I’m pretty sure I say the same few things over and over. You’d have to ask my immediate friends, family and colleagues.

What do you dislike most about your appearance? I reckon I’ve generally let myself go a bit, but not enough to be one of those guys who just looks like he enjoys life.

What or who is the greatest love of your life? My family.

What is your current state of mind? Tired, yet feeling a little more clear-headed for that.

When and where were you the happiest? Countless simple moments at home, with my family.

What is one talent you wish you could have? A perfect metabolism. I mean, I’m far from obese, but that would be awesome, right?

If you could change one thing about yourself, what would it be? Be less crabby. As mentioned above.

If you could change one thing about your family, what would it be? Realise how amazing they are. Sorry if that sounds trite.

What is your most treasured possession? My wedding ring. Sidenote: I’m a real hoarder, but most stuff doesn’t really matter I guess. Just don’t ask me to throw any of it out.

What do you regard as the lowest depth of misery? The General Public.

Where would you like to live? Where I am now, just with more room and quieter neighbours.

What is your favorite occupation? Someone on permanent gardening leave. Or any job where you can be awful, yet guaranteed a fantastic pay-off. Like football manager, or senior executive.

If you were to die and come back as a person or thing, what do you think it would be? More of the same.

If you could choose what to come back as, what would it be? More of the same.

What is it that you most dislike? Eggs.

Who are your favorite writers? The ones who leave the humanity in there. Whatever that means.

How would you like to die? Well, I wouldn’t. So, in some sort of scenario where I’ve reconciled myself to the fact that I will die and feel OK about the whole deal, and know those close to me are alright about it too.

What do you most value in your friends? That we can go months without seeing each other and pick up where we left off. But mostly that they get a round in.

What is the quality you most like in a man? Not hung up on your stereotypical gender roles.

What is the quality you most like in a woman? Not hung up on your stereotypical gender roles.

What are your favorite names? Stan “The Lariat” Hansen, Negro Casas, Genichiro Tenryu

What is your motto? Never have a hangover on your own time. And don’t be a dick.

Filed Under: esoterica, not sport