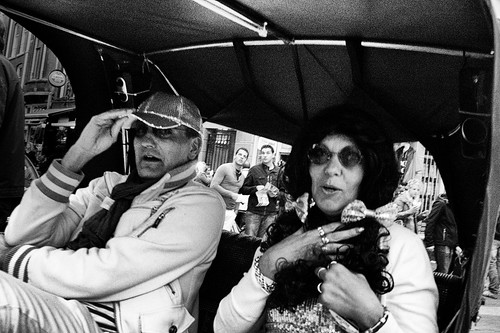 Friend of the blog Tim has written a great post about the distinction between his written personality and his personality in real life. You should go away and read his thoughts rather than mine. Tim is incredibly eloquent, clear and heartfelt. Because that is just how he writes. That is what he does.

Reading his post made me revisit something I wonder about every now and then – how we divide ourselves up. I know I am a different person at work to the person I am at home. I think I am a different person with one set of friends to another. I don’t think this is disingenuous. I don’t think this makes me two-faced or deceitful. I think most of us adapt to our surroundings and our circumstances. We read the room and react accordingly. There are times when we can be ourselves and times when we cannot, or at least have to become a version of ourselves. Or maybe we are many versions of ourselves, not just the one.

I’ve always had a deep suspicion and distrust of people who proclaim words to the effect of “Well, I am who I am, and you just have to take me as you find me, that’s just who I am” as that suggests a deep underlying lack of empathy. If we all did as we pleased things would be pretty miserable for everyone. There is being true to yourself, and there is realising there is more to life than yourself, or your truth.

Well, that’s my take, anyway. But still, once you are vaguely aware of this it is enough to make your head spin once you become conscious of how differently you might act, or might come across, and wonder if that OK or if it is weird and manipulative and before you know it you are yet another variant on your personality, loitering in the corner second-guessing yourself or alternatively in the centre of the room holding court desperately trying to prove you are normal and real and true and once you start trying that whole enterprise is doomed to fail.

However, if you’re aware of these issues, as socially crippling as that might be, you’re probably doing alright. You know the risks. You’re thinking about your place in the world and how that relates to others. You’re probably more honest than the “That’s just who I am, take me or leave me”-types. You’re almost certainly more fun to be around.

But Tim’s post covers that whole other problem – how you come across one way (or multiple ways, as described above) in real life, but can be a whole other person when you write stuff down. Now, that isn’t really an issue if you just write in private, stuffing notes in your drawer. It is less of an issue if you write online and are completely anonymous. But it all gets little funny when the two worlds of in-person and writing-down-person meet.

I know some real-world friends and acquaintances read things I post here. They may be reading this sentence. And that feels quite odd. When I write I think I end up heading towards a particular persona. I’m honest, but a particular type of honest. I’m not quite the real-world me, both because throwing my thoughts into the old world-wide-web is a whole other exercise to making small talk at a party or confiding to a friend, but also because I don’t think I could actually properly articulate my real, true, honest, no-holds-barred thoughts here – both from a technical perspective (I’m not necessarily skilled enough to articulate myself properly, or organise my thoughts to do so, as I often only understand what I think once I’ve written something, that is part of the thought process, and I guess my writing process) and from a self-preservation perspective (completely and totally spilling my guts online would be strange enough, let alone doing so knowing there is a chance that real people might read it. I might as well just post a non-explanatory sadface on Facebook and be done with it).

I’ve had some lovely feedback on my writing from real people I actually really know. I’ve had people ask more about it, seem genuinely interested. And that is great, but it takes some getting used to. I’ve never really actively promoted my writing amongst friends and family. I won’t bring it up unprompted. I think I started blogging, and I continue to write, because I enjoy the process rather than because of any great yearning to be acknowledged as a writer or anything like that. I enjoy writing, so I write. I never wanted to be one of those people who proclaim to anyone who will listen that they are a ‘writer’ or whatever. I thought I’d just get on with it. If anyone happens to read it and like it, then that’s a bonus.

So, I’m not entirely sure where I’m going with this. But maybe that is the fun of blogging. You can think aloud. You don’t have to present yourself in any particular way. And with any luck someone will read it and connect it some sort of small human way. Or even better, nobody will really read it and you can just carry on with the navel gazing in your own little space on the internet…because human connection is great and all, but you have to enjoy the writing first.

But then we’re all broadcasters now, right? So now we not only divide ourselves within our day-to-day lives, but we present ourselves in a whole new range of ways through our Facebook updates, tweets, text messages and so on. And in turn, we interpret those selves others present to us, interpreting that photo they posted on their wall, deciphering the layers of meaning in their tweet, wondering what they are really saying in their text message. I guess this sort of presentation of self/selves has always gone on, but now it is heightened and accelerated.

And it all feels simultaneously very important and rather banal.

However this did make me think a little more about proper writers. I think any writer, of fiction or non-fiction, will end up including some part of themselves and their lives in their writing, sometimes consciously, sometimes not. No writer works in a vacuum, no writer is totally objective, no writer makes everything up. But to write like that successfully must require ignoring, or at least fighting, those impulses or concerns about the self, about putting it all out there.

I suppose this is why great writers sometimes, maybe often, aren’t great people. Maybe the best writing is a little uncomfortable. Maybe it doesn’t worry about the effect it may have on the writer or the people the writer knows. I’m not sure.

And how to avoid indulgence, solipsism? It seems you would need to be a great editor with no filter. And a thousand words in of sort-of-sharing and sort of saying nothing I know I can’t achieve that. But it has been fun trying.

But I think I’m more comfortable being a little more compromised. It is only writing. And if that means I avoid certain subjects, or write less, or write more carefully, then so be it. Which is a rather long-winded way of explaining why I haven’t been posting lately – the worst of all blogging subjects, right?

You should read just go back and read Tim’s piece.