Every Beer Has Its Place: The Rise of Bexley Brewery 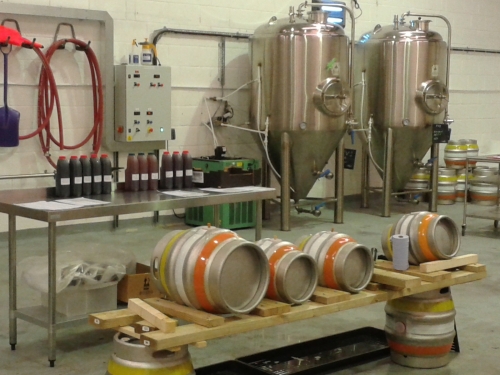 So, bear with me while I start with a little history lesson. The beer will follow.

Reffells Bexley Brewery Ltd was bought by Courage and Barclay in 1956 and closed the following year. The London Borough of Bexley was formed in 1965, and like the boroughs that had preceded it existed without a local brewery. In early 2014 rumours grew about a brewery launching in Bexley. A beer from the brewery appeared at the local CAMRA festival over the summer. By the autumn, Bexley Brewery had officially opened and the area had its first brewery in nearly sixty years.

Bexley is probably the least fashionable borough in London. It sits to the far South East of the city, on the border with Kent. For historical reasons most Bexley addresses are actually Kent addresses, leaving the area with an odd sense of identity – some people considering themselves Londoners, others feeling far more a part of Kent. Bexley seems to have multiple identities, and then sometimes feels like it has none.

It is perhaps London’s forgotten borough. I have met many Londoners who are barely aware of its existence, and who would certainly struggle to name any of the towns within it. Gentrification or Shoreditchisation is a fair way off yet. This is no bad thing. It is a resolutely suburban area, but I like it that way. I like the quiet life.

In January I went to Bexley Brewery for a brewery tour. The brewery is housed in an industrial unit in Erith, in the north of the borough, right by the Thames. There are huge skies, punctuated by the giant wind turbine between the industrial park and the river. On one side there are builders’ merchants, scrapyards and the like. The final remnants of when the Thames really was a working river. To the other side there are the marshes, wild land leading up to the span of the Dartford Crossing in the far distance. This very much feels like the border between town and country. A no man’s land, almost.

It seems apt that the brewery is housed in Bexley’s industrial heart, or what is left of it. It feels like a continuation of the area as a place for production and hard graft. Around here they used to make armaments. Now they make beer. This feels like progress.

Cliff gives us a brief potted history of beer and brewing. He talks us through the key elements, hops, barley, yeast and water. He explains how tweaking each can create very different beers, different flavours, colours, aromas. I’d never really fully appreciated the role water plays. Cliff explains how the hard water of London works really well when making darker beer, hence the success of London Porter. We get to taste different barley, smell different hops. The pieces of the puzzle start to come together.

This provides a good foundation for then taking us through the brewing process. We’re then guided around the equipment itself. It is a small set-up, I guess, by most people’s standards, but it is still pretty impressive kit. It sounds like Cliff and Jane are here all hours making sure everything is right. The attention to detail in each element of the brewing is evident. It also feels like this is the exciting stage of a new brewery, where things can still be tweaked, mistakes can be learned from, discoveries can be made.

I suppose now is as good as time as any to talk you through their beers. That’s what we’re all here for right? They are mostly named after locations in the borough. I love this. They are promoting the area, giving it more prominence. The best beer is aware of place.

BOB or Bexley’s Own Beer is a pale ale. It seems to be the most popular beer they are producing, although I guess that is open to debate. It is really well-balanced, an almost grassy hopiness up front, followed by a malty sweetness. I do like a quaffable beer, one that keeps you drinking by doesn’t make you fall over. BOB is that kind of beer.

Redhouse, named after William Morris’ Red House in Bexleyheath, is a pale ale but a bit darker, a bit..well…redder. The hoppiness is still there, a good bitterness, but then a more intricate maltiness perhaps. This is a little more complex than BOB, one for a colder day perhaps when you fancy mulling over your pint. A log fire and a sleepy dog wouldn’t hurt either.

Golden Acre is a golden ale, named after a small park in Bexley Village. This is the brewery’s newest addition, with half an eye on the summer drinker. It is definitely a thirst quencher, and can stand being a little colder than the other beers. This is one for when you want something really drinkable but with a little more substance than your usual summer beer when you’re planning your barbeque.

Then there is the Black Prince Porter, named after the pub and hotel. Ask around and you’ll hear about The Rolling Stones, Jimi Hendrix, Cream, Thin Lizzy playing there way back when. You’ll then hear someone dispute that and list a whole other list of bands that played there. But safe to say, a lot of great bands played there. Now it is a Holiday Inn with lots of wedding fairs. Not quite the same.

But the beer is amazing. Cliff was right about the hard water. This porter is a little smoky, a little sweet and so moreish. I think porter can be a little bit of an acquired taste at times, but this is so approachable, yet has got enough going on to keep the most hardened porter drinker happy.

All of the above are good beers, the porter is truly great, and they all suggest Bexley Brewery is full of potential and I’m very excited about what they do next.

I think the success of the beer, and the brewery as a whole comes from their philosophy. Cliff is clear that he wants to produce balanced, flavourful beer at a sensible strength. All of their beer hovers around the 4 per cent mark. They are not hiding behind crazy ABVs, but more making the most of their ingredients to produce beer that is drinkable, interesting and won’t make you fall off your stool after a couple of pints. They are also working with classic styles rather than experimenting for the sake of it or stunt brewing with the sort of approach that gets headlines but little else.

So I suppose they are new brewery that is also pretty traditional in its outlook. And this goes back to the best beer being rooted in place. They are aware of their immediate market and they produce beer in the spirit of the area.

The beer drinkers around here are conservative with a small c (and admittedly, some are Conservative with a big C too) and they know what they like. They want a good session beer that is fresh and full of flavour. The call is for beer balanced between the hops and malt, rather than hopbombs or anything crazily sour. The people of Bexley are fairly steady, not too adventurous, but appreciate quality and tradition, and that makes Bexley Brewery perfect for the borough’s drinkers.

The growth in micropubs in the area doesn’t hurt. More and more are springing up, beer lovers taking over empty shops and selling four or five beers straight from the cask, with no music, no fruit machines, no mobile phones, just chat and friendliness, drinking like it used to be. The people of Bexley like to go out for a drink, it is just their ale drinkers have been looking for more decent places to get a well-kept pint, and have been waiting for a good, fresh local beer to drink there.

This makes sense for the wider market too. There are plenty of new breweries chasing the latest trend or pushing the boundaries of brewing. And that makes sense for them. But there is definitely also a place for brewery that just does the simple things well, or makes the complexities of ‘simple’ beer look effortless.

It is funny, but after looking around the brewery, meeting the owners, drinking their beer, I feel a real attachment to Bexley Brewery. Having a local brewery feels a bit like having a local football team to support. I won’t necessarily love everything they produce, but they will always be there for me, will feel like part of my identity as a Man of Bexley. I will cheer them on. I will tell people about how great they are, as I have been doing here. They don’t just produce beer I like drinking, they make me feel a little closer to the area I live. They make me a little prouder of my area, and prouder to live there and drink there.

That is what great breweries, and great beer, can do.

5 Comments to “Every Beer Has Its Place: The Rise of Bexley Brewery”