The Future of Rock and Roll 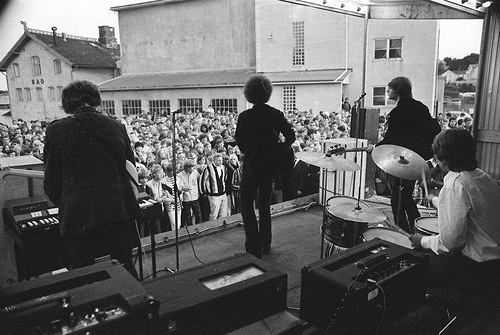 I’m not entirely sure that I’m best placed to write about the future of rock and roll. I might seem qualified. I’ve listened to a hell of a lot of music in my time. I’ve read a lot about music too. I think I have a pretty good understanding of rock and roll history and what makes a great band. Yet I’m not really the right demographic anymore. Rock and roll is music for the young, right?

Or is rock and roll just a heritage industry now? Old bands reform, tour and release new records. New bands sound like old bands who sound like older bands, a xerox of a xerox of a xerox. Nobody really gets excited by new bands, new releases. The market is saturated with reissues, an industry tricking us into buying the same songs again and again. Is rock and roll even valid anymore? Is there a future?

I still think great music and great bands can change lives. This might be in the visceral sense of hearing an amazing song at the right time of your life. It might be from immersing yourself in a band and everything they believe in and were inspired by, being led to other bands, books, films, politics. It might just matter in the sense of feeling less alone.

So I think there is a blueprint for the future of rock and roll.

Great songs are an obvious starting point, but great songs alone aren’t enough. The future of rock and roll can’t just be a watered down version of what we’ve already heard. Bands should be inspired by what is around them, by more vibrant forms. That doesn’t mean just sticking a breakbeat behind the standard leaden rock schtick. But it might mean picking up on textures and timbres from hip hop, R&B, dubstep or whatever. It might mean playing around with new structures, learning from the ebb and flow of dance music. Trying to recreate other genres within the rock format is probably going to sound awful and calculated, but taking on some elements in an inventive way might make rock sound more vital. There has always been a magpie touch to rock and roll.

Rock and roll also needs bands that matter again. They should be outspoken. Here we are in the grip of late-stage capitalism surrounded by war, terrorism, economic uncertainty, the oppression of the lower classes and nobody in rock and roll is really speaking out about it, writing about it. Where are the protest songs? Where are the bands introducing their followers to new avenues in the arts and politics? Where are the great interviews that make you care about a band? Rock and roll needs to respond to its environment, to reflect it and try to change it, knowing that aim is futile but trying anyway.

We need bands that are glorious failures. Filling stadiums is no fun, and does nothing but distance a band from its listenership. We need fuck ups, gamblers, self-saboteurs. Rock and roll isn’t for the popular, it is for the outsiders, the alienated, the alone. The best bands aren’t part of the establishment, they don’t stack up the gold discs and the TV appearances. They make mistakes, they fail, they are human. They may not look like us, act like us or live like us, but in their actions they appear to feel like us.

There might not even be guitars. And it certainly doesn’t need to be four white guys stood on a stage. But there will be that certain something, that you know when you see it and when you hear it.

Post inspired by Steven’s suggestion that I write about the future of rock and roll.

Image from the National Archives of Norway, via Flickr

8 Comments to “The Future of Rock and Roll”