There is nothing to be gained by trying to get away 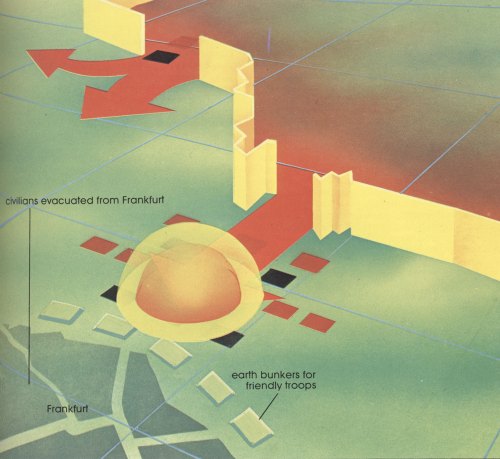 Here’s something interesting for you – the BBC transcript to be used in the event of a nuclear attack, that would have most likely been used if the bomb had been dropped on Britain in the seventies or eighties. It is chilling stuff, but also pretty sensible advice. I guess clarity, authority and calm would be of utmost importance, in the circumstances.

However, my favourite discovery was that they had in mind to protect certain key entertainers to use on the service post-attack. I never found out who they had in mind, but the thought of a bunch of BBC showbiz types holed up in a nuclear bunker beneath the British countryside added a certain note of bathos to proceedings, and was enough of a bizarre and mundane detail to make the whole situation feel a little more real, if not entirely imaginable.

After reading the transcript today I realised that the PC I’d saved my dissertation on has been destroyed and I’d never printed out my own copy. All that effort, gone forever. For a moment I felt sadder about that than the prospect of nuclear Armageddon, which shows just how self-centred I can be.

To return for a moment to The Resentment Machine, as referenced in my last missive, because heaven knows I’m not afraid of bludgeoning a subject/text to death, wringing out every last drop of meaning. There is a key point made around the online distrust of creation, in favour of criticism and curation.

“For those who are writing the most prominent parts of the internet—the bloggers, the trendsetters, the über-Tweeters, the tastemakers, the linkers, the creators of memes and online norms—online life is taking the place of the creation of the self, and doing so poorly.“

Now, I wouldn’t pretend to be “writing the most prominent parts of the internet” by any stretch of the imagination, but this still stopped me short. I know that online I am in some sense a critic and a curator. And taking a step back I do realise that online curation/criticism can be something of a cul-de-sac. Retweets, embedded YouTube links, reblogging on Tumblr etc don’t generally offer much sustenance.

Online curation can feel fun in the same way that sticking posters and pictures on your bedroom wall as a kid was fun, but much like that poster display, it ain’t art. Criticism seems an easy and natural default mode. I’ve experienced something, I’ll report back. But is being purely responsive to others really that constructive? Alternatively, can anything really exist in a vacuum? Isn’t everything a response to what went before? Is the point not that criticism per se is the problem, but that poor criticism is?

The curation/criticism model may well lead to online stagnation. It certainly makes an already ephemeral medium feel more so. Yet what is the alternative? Better curation and better criticism? Or something different – something the mainstream, traditional media can’t/won’t offer? How do we move on?

So, today would have been David Foster Wallace’s fiftieth birthday. I won’t go into much depth about his work because the internet is full of it, especially today, and it is all written in a much more informed way than I could achieve. There’s  lot of good stuff out there, check it out. Or check DFW’s work out if you haven’t already. You really should.

DFW is already well on his way to literary canonisation, but one interesting (if minor) influence he appears to have had is in the style of writing of many bloggers, as the New York Times picked up on last year. I’ve certainly been guilty of it on many occasions and have seen it to a greater or lesser extent in many other bloggers’ work. His conversational, tangential and self-deprecating style of writing seems a natural fit for the medium of blogging with its freedom, informality and immediacy. I’m sure there are plenty of bloggers who haven’t read DFW but write like him, either because it comes naturally as they pound out ideas as they come to them in their own internal voice, or they have been influenced by the prevailing trends in blogging writing style.

Yet, like any homage (for want of a better word) it has its limitations. DFW could get away with a lot more than most because with a perfect grip on grammar rules he could write a million word sentence with a billion qualifiers and it would still make sense. Plus, he was one of the finest writers of his generation.

Us bloggers don’t fit that bill, obviously. Writing like a third-rate DFW isn’t that satisfying, but so many tenets of the style are. There must be a way forward, right?

I’ll still be a lazy blogger, still post pretty commons images and fun YouTube videos, still bounce off others’ hard work rather than shape my own ideas, still use comfortable and well-worn stylistic tics and tricks, still turn everything (even nuclear war) back towards my navel. I don’t think I’ll make any grand statements, or proclamations on The Future of Blogging but I’ll continue playing with the medium because there is no editor, or paymaster, or audience to tell me not to. It will probably be awful in parts. It certainly won’t be art. But hopefully it will be something.

Image from the Reanimation Library