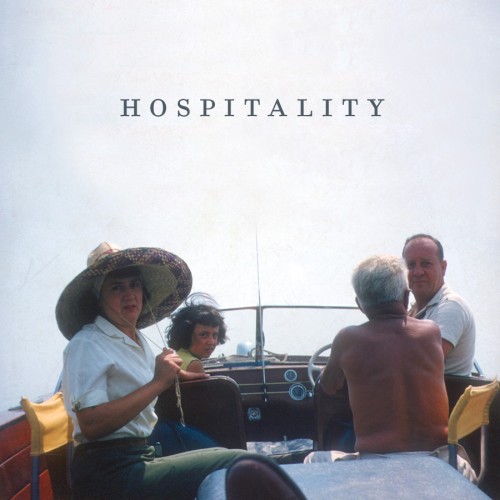 What does it take to create a great indie album in 2012? Can it even be done? Indie rock, pretty much however you define it, has always been a derivative art form, influenced equally by sixties pop/rock and punk with a sprinkling of other more esoteric sounds. And it has always influenced itself, but more and more so in recent years, bands influenced by bands influenced by bands. There is always the risk and the reality of the law of diminishing returns. A xerox of a xerox etc.

So perhaps indie rock/pop cannot be really genuinely innovative. But it can do what it does well. There is still something to be said for craft and execution. And nowhere is that more in evidence than on Hospitality’s self-titled debut. Listening to it for the first time I had to double-check that this was their first record. It sounds accomplished and polished, like a band very much confident in their own abilities, much more like a third or fourth record. No tentative early steps here. I think the word is assured.

Another word is breezy. Not in the sense of being disposable or slight, but summer-y and relaxed in itself, particularly in the easy jangle and lilting melodies of the opener Eighth Avenue. Then comes the easy, effortless pop of Friends of Friends and Betty Wang. They know that on your classic pop albums you front-load the hits.

The mood subtly changes, to the more woozy Sleepover and the mini-epic Argonauts, the pace ebbing and flowing, yet the album feeling very much a sum of its parts, rather than a bunch of songs thrown together. The band keep things interesting with a variety of rhythms beyond yr standard indie drummer fare, melodic bass from the schools of Andy Rourke and Peter Hook and clever, economical guitar work. All of this is augmented by keys and woodwind that service the song and never stick out as unnecessary ornamentation. This is a carefully considered and flawlessly arranged record.

And that’s not to mention the clever lyrics of Amber Papini that your correspondent looks forward to unpicking over further repeat listens. It is one of those albums you kind of want to live in for a while.

Naturally, you can play spot the influence. There’s plenty of English early 80s indie in there. Some Belle & Sebastian. Perhaps some Throwing Muses, particularly in the neat yet surprising shifts in melody and rhythm. But it stands very much as an album in its own right, and already feels like a pretty good candidate for soundtrack of my summer. Oh yeah, and I’m a sucker for vintage photo album covers. It’s all in the details, and Hospitality get that.

2 Comments to “First impressions of ‘Hospitality’”