In at Number Two…

I’m sure I’ve harped on about this before here, and elsewhere, but design is really important to me in terms of beer. I think a beer should be presented well, it should look as good as it tastes. Maybe I’m just superficial, but I like a handsome pump clip or bottle label. If a brewery has a strong aesthetic then there is a good chance that they care about every aspect of their operation – and such attention to detail will lead to good beer, right?

Great Divide beers look great. Clean, strong design. Great typography. Clever use of colour. I could spot one of their beers a mile off. I appreciate any beer that looks to move past the myths ‘n’ magic iconography so many beers fall back on, or double entendre inspired nonsense. It shows a  brewery wanting to appeal beyond the insular boy’s club stereotype of beer geekery. Such great design helps make their beer more accessible and appealing.

Naturally, none of this would matter if the beer was horrible, but I love the stuff. It is easy to drink without being bland, has a depth of flavour without veering into Stunt Beer territory. Great Divide beers have been a reliable fall-back whenever I’ve been at a loss at what to buy on one of my fancy-beer-buying-missions.  I’d love to always have a six-pack of ‘em in my cellar. I should probably work on that. 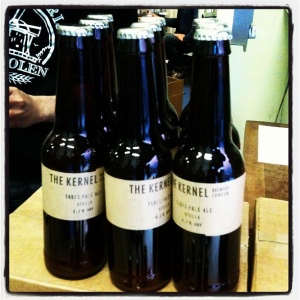 And Kernel seem to have the best of both worlds. They produce a wide variety of pale ales that seem particularly indebted to US styles and through them have been invaluable in showcasing to me the subtleties of different hops. They have really been a bit of an education. Oh, and they taste great.

Their darker beers, meanwhile, draw on old English recipes and are challenging, yet not completely unapproachable. If a beer can be rewarding, their beers certainly can.

Yes, they look great too. The simple brown label with the beer style stamped on it really accentuates the ‘craft’ aspect in craft brewing, looking simple, stylish, and nodding to home brewing traditions.

To top it all, they are based in beautiful South London, so I can get hold of their beers really easily. I ought to visit the brewery one of these days too. While the likes of Meantime are based even closer to me, I don’t have the same attachment to them that I’ve developed over the past year with Kernel beers. It will be fascinating to see how this young brewery progresses.

Top image from National Library of Australia, via Flickr