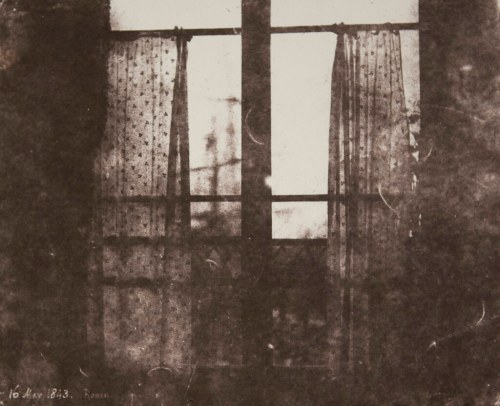 A casual gleam of sunshine, or a shadow thrown across his path, a time-withered oak, or a moss-covered stone may awaken a train of thoughts and feelings, and picturesque imaginings.

In May 1843 William Henry Fox Talbot stopped off in Rouen, on his way to Paris to market his calotype photography process, a competitor to the French daguerreotype. Talbot was shown to his room at the Hôtel de l’Angleterre, which overlooked the quai du Havre, full of sailing boats making their way from the port of Le Harve to Paris, or vice versa. Just two weeks prior the railway between Rouen and Paris had opened, with work beginning on extending the line to Le Harve. The world was changing.

He was capturing the one thing in the room he couldn’t actually capture. The one thing that was there, but unseen. The border between the inside and outside, the private and public, the old of the hotel and the new of the changing world outside. The interior looked ever older, the outside changing so fast that the ships outside were already to be outrun by the train.

To truly get the right exposure would not be easy, just as it is never easy to really articulate the old and new, the inside and outside, the private and public. All he could really do was try to expose the window, even as the least tangible element, perhaps because it was the least tangible element before him. Even if it meant everything else blurred, perhaps because it blurred everything else. That there is a greater truth in that. Neither nor private nor public, the past nor present nor future, are ever really clear.

Image from the Museum of Photographic Arts, via Flickr