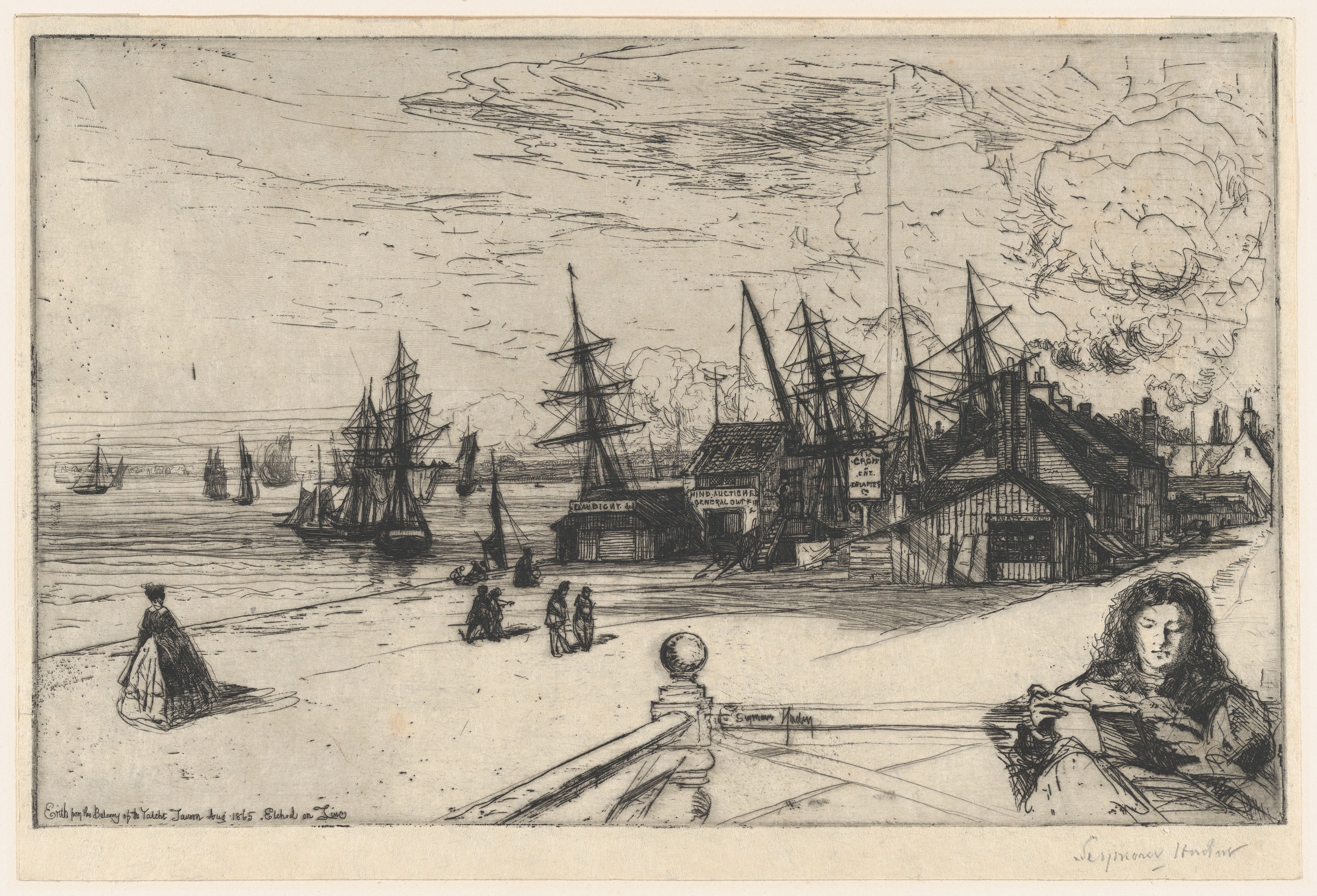 Seymour Haden sits on the balcony of the Yacht Tavern, Erith. Seymour Haden, the famous etcher and surgeon. Two very different jobs, on the surface, and yet, on reflection, there are some similarities. The scalpel and the graver look interchangeable to the layman. Both occupations require precision, decisiveness, delicacy.

Etch, from the Dutch etsen, from the German ätzen, from the Old High German azzon, “give to eat, cause to bite, feed”. Seymour Haden sits on the balcony of the Yacht Tavern, Erith. He sits, and he etches.

Haden was known for working directly onto a plate whilst in front of his subject. He would work in the field rather than a studio.

The image bears the legend: Erith, from the Balcony of the Yalcht [sic] Tavern.

The image he created, sat on the balcony of the Yacht Tavern, Erith, is not just a work of art, it is a record of his visit.

Seymour Haden is here in Erith in 1865. It is the end of an era for the town, although the town may not have been aware of that yet. The preceding two decades had seen Erith emerge as a Thames-side resort, a place for day trips, holidays, for escape from London.

In 1844 the Pier Hotel was built, and in 1845 the gardens nearby opened, with a grand walk, maze, arboretum, archery field and bowling green. The Star and Diamond companies capitalised on the new technology and popularity of steamboats. Each day visitors would arrive from London here in Erith, and enjoy the new amenities, the fresher air, the ambience of an ancient Kentish town.

Yet, by the time Seymour Haden sat down on the balcony of the Yacht Tavern and began his work Erith’s time as a resort was already nearing its end.

The end was marked in a beginning, the opening of the grand, ornate technological marvel of the age, the Crossness sewage works, a little way up the river. Crossness was officially opened by Edward, Prince of Wales, attended by Prince Alfred, the Duke of Cambridge, Prince Edward of Saxe-Weimar, the Archbishop of Canterbury, the Archbishop of York and the Lord Mayor of London. The most prominent and well-known figures bore witness also to the end of Erith’s golden age. By the time that Seymour Haden sat down on the balcony of the Yacht Tavern, Erith, raw sewage was passing and settling on Erith’s shores, rather than drifting out to the North Sea, as planned. The town, the pier, the taverns, their balconies, were no longer the idylls they once promised to be.

Haden was known for working directly onto a plate whilst in front of his subject, and yet this doesn’t necessarily mean we can believe everything we see. I have looked at the photos that exist of the Yacht Tavern, and I’m yet to see a balcony. Perhaps it was once there, and then removed. Or maybe Haden actually sat at a window, or on the roof, and thought a balcony would work better for the picture.

Who is the figure? Were they really there, on a balcony that quite possibly didn’t exist?

Yet we know that Haden was there, and so I wonder about Art and the nature of finding some kind of truth, rather than just mere accuracy. Every artist makes decisions, compromises, priorities. Art is more than what is in front of us, it is interpretation, a message, or something else, even if that something else is nothing. This is a record of Seymour Haden’s visit, but it is not just that.

The Yacht Tavern was demolished in 1930s, to make way for a wider road. Residents of Erith still look back bitterly to the demolition of much of the town in the 1960s, where a Victorian high street and winding backstreets made way for a Brutalist shopping precinct that never really worked, that generally smelled not unlike how I imagine Erith smelled in 1865, as the results of the modern marvel of Crossness drifted past. Yet, as we see from the demolition of the Yacht Tavern, destruction has always been part of Erith’s fabric.

When the Yacht Tavern was demolished, the licence was transferred to a new public house in nearby Bexleyheath, to serve the residents of the area, populating the newly-built houses, the rows and rows of suburbia springing up. The pub moved from town to suburb, as the people did too. The pub is still open to this day, it is one I loitered in on many an occasion as a teen and into my twenties, one of those places where you would always stumble into an old friend, a friend who moved away while some of us stayed, the homing instinct leading them back to the place we went to in those last days of school, where we all went for Christmas.

The balcony may have not really been there. And the view beyond is open to question too. A storefront is inscribed with name of Charles-François Daubigny, a painter of the Barbizon School, known for working outside, with his subject in front of him.

Daubigny never owned a shop in Erith, yet here he is, the artist known for working in situ, rather than in a studio, much like Haden, Haden reaching out to a fellow artist, an artist with the same approach. We know that Daubigny met Claude Monet in London around this time. He may have then made his way out from London, on one of the popular steamboats of the time, to meet Haden, in Erith, as Haden etched a scene from the balcony, or other vantage point, of a local tavern.

At this time, as we know Daubigny did visit Erith at some time. In 1866 Daubigny would produce La Tamise à Erith. 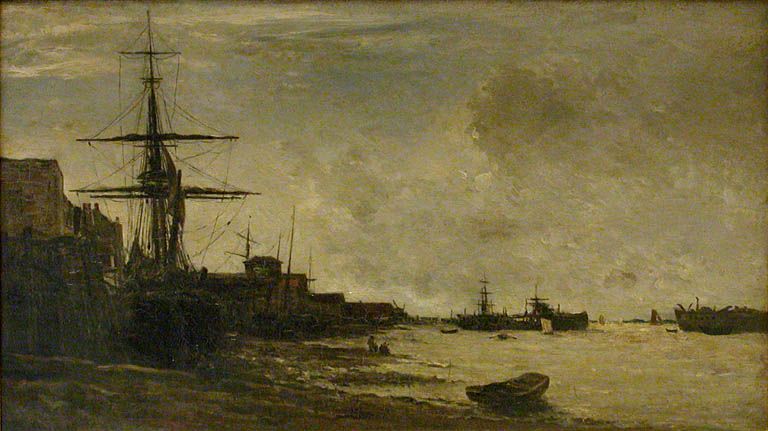 The view appears to be from around where Haden had inscribed Daubigny’s name – Haden looks out to an imaginary Daubigny, Daubigny looks back.

The painting hints at the Impressionism that would follow, a movement inspired by artists such as Daubigny. The scratchy clarity of Haden is replaced with something far murkier, darker. It feels apt for a depiction of a town in transition, decline even. There is a blurring of place, time, hope.

The buildings situated to the left of Daubigny’s painting are around where the Yacht Tavern would have been, I think. No balcony is discernible. The town no longer looks like a resort here. It is a working town. A town that still required a tavern, many taverns by all accounts, just the clientele must have changed. The steamboats stopped coming. The town moved on, then the taverns moved on too.

These two pictures show how dialogue is so important. Great art, writing, beer even, is a conversation. It is a nod, a challenge, an agreement, a revision, a rebellion. And these works of art show that this dialogue can and should take place in the margins. Here on the edges, surrounded by metaphorical and actual waste, we can create, we can reach out, we can connect.

Filed Under: art, booze, not sport