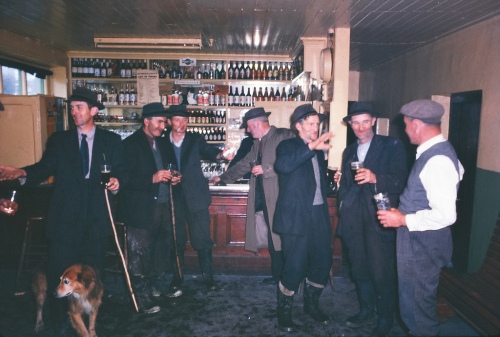 As I worked on my review of Dušan Šarotar’s Panorama, I gathered quotations and I gathered reflections, and did my best to marry the two, one supporting the other. It took me back to my school days, my university days too, the point where writing feels more like brickwork than creativity, but generally an exercise where with a bit of thought and sweat you can produce something reasonably sturdy.

…but still, in those long muted lulls between pints, when the barman was skilfully rotating the glasses beneath the brass tap so the foam, those creamy clouds, laid itself slowly upon the black waters and was overlaid with hope, with consolation, a beery firmament – then in the profound silence, as if in melancholy, you could sense in the hands and eyes of these people something fantastical, mysterious, something that could be neither drowned nor spoken, something that drives writers to write, sailors to sail, like an unfathomable, unquenchable thirst that gnaws at you, that calls for another glass of the black stuff.

I’m not sure there are many better descriptions of drinking , and the solace and sadness within. It makes me want to drink a pint of stout, but it also makes me think about why I want to drink that pint.

There is a magic in the gentle rhythms of a barman pulling a pint of Guinness. It adds a theatricality to the scene, a sense of anticipation. I wonder if it is really necessary, but then I’ve had a fair few bad pints in my time when it hasn’t been poured properly, so I’m happy to play along. But there is something in the waiting and in the ceremony – a pint of stout (or any drink really) in a good pub is a glorious thing and one of life’s simple pleasures. And sometimes in life you need to cling on to whatever simple pleasure you can find, but perhaps not cling on too tightly.