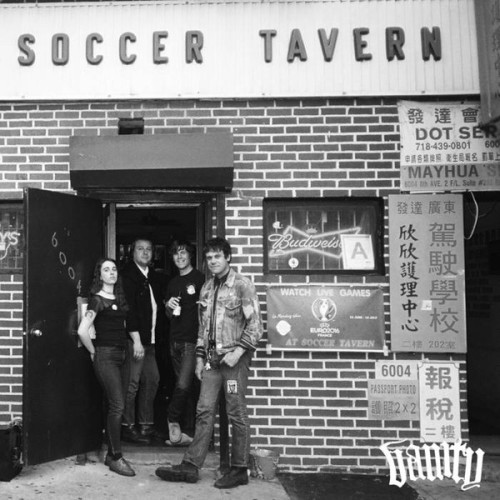 I like bands that make music to watch drinks by. Drinking Music. I don’t even think you have to drink to it, but it has that kind of feel. And there are two kinds of Drinking Music. There is the music to wallow by. The music that transports you to a bar stool, nursing a whisky, wondering where it all went wrong. Then there is the other kind of Drinking Music. The kind that transports you to that place two drinks in where the worries of the world are fading and you start to feel like you can take on that same world and feel a little less alone within it too.

Vanity’s new album Don’t Be Shy is Drinking Music. And it is that latter kind of Drinking Music. It is life-affirming, exhilarating, joyful. It is the kind of record that puts an arm around you, buys you a beer and tells you everything is going to be alright. It might be an old-school rock and roll record, it might sound like it could have been created any time in the last 40 years, but it feels absolutely vital and of the moment too. I need records like this. I like to wallow, but sometimes you need a little hope. Sometimes you need that rush of adrenaline and optimism. Sometimes you need to feel defiant, not defeated.

Opener You’ll Never Matter Much To Them is the sound of moving onwards and upwards, the title less a reprimand for caring about what others think than an expression of belief that You Don’t Need Them Anyway. This is the first beer to toast getting sacked from a job, or dumped by a significant other, when you should feel sad but know it wasn’t working anyway. The title of the album, and title track, Don’t Be Shy works in a similar way. It is advice not admonition. Just be yourself. Don’t get hung up on what other people think. It is the eternal promise of being surrounded by friends in a good pub a few drinks in. The barfly’s advice that makes it all alright for a little while.

This might all sound corny or trite or whatever. And perhaps it is. But these single-entendre principles are important right now, in an age when nobody really means what they say, will say anything to stay afloat or ahead, and community and comradeship are sneered at and attacked.

And delivering all this via the ol’ redemptive power of Rock and Roll feels right. This is an unashamed rock and roll record. You can try to pick apart the influences. I can try if it helps frame the record. There is a real mix of early 70s rock and early 90s indie. In terms of the former, there is the looseness and swagger of The Faces, or Exile on Main Street-era Rolling Stones. In terms of the latter there is the hazy melodicism of Ride, anything on the poppier end of shoegaze, something like that.

You can look at the song titles for clues too. Pounding Boogie is a pretty apt description of the album, the track itself offering up a muscular glam rock, dare I say it, almost a bit like Slade. No bad thing. It then ends with an acoustic coda. Another acoustic moment is A Moment’s Peace, which provides just that. This is another clue. This is very much an album rather than just a collection of songs, if that makes sense. Don’t Be Shy works listened to as a whole, with those acoustic moments providing a bit of a breather, helping pace the album, give it shape.

Whatever the influences or reference points, it is a distinctively human-sounding record. The looseness of the playing, the lack of polish in the production, the woozy melodies in the vocals all make Don’t Be Shy feel like a genuine attempt at connecting – a reminder that great rock music reaches out, makes you feel part of something bigger, points out that you are not alone.

Drinking Music. Even if we haven’t got a beer in front of us. Even if we know this is a romanticised idea and in the morning we’ll have a sore head. Because we know this kind of romanticism is doomed, and that is half the appeal. It’s the hope that gets you, but you need it all the same.

Don’t Be Shy is released on Katorga Works and is available on Bandcamp, for whatever price you want to pay