Happy Birthday to The Penny Farthing 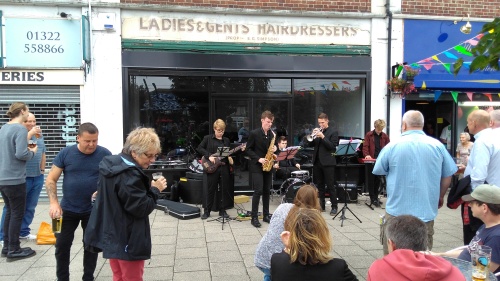 Saturday saw the second anniversary celebrations of Crayford’s micropub, The Penny Farthing. In two years the pub has gathered both awards and a band of loyal drinkers. It is all well deserved. The pub, based on the simple concept of serving well-kept beer in a pleasant environment, is a wonderful place to drink. They just get it when it comes to what makes going to the pub brilliant.

The celebrations were lovely too. It would be easy to get this kind of event wrong, with the logistics and sheer number of visitors involved. Yet, everything seemed to run smoothly. There seemed to be an endless supply of staff on hand, either that or those that were there were so efficient they just made it seem that way. And despite the number of people wanting a beer, there was still service with a smile. It is one thing being the proverbial jovial host when the pub is half-empty, quite another when the place is packed.

There was also a constant supply of beer. Now, this might seem a pretty standard requirement for a pub, but there was a lot being drunk and it is easy to misjudge demand. I’ve been a fair few pubs and beer festivals where that has happened. But there was always a good selection on offer. I’m a little hazy on it all, but the Mosaic from Hammerpot Brewery, Tasman from Bexley Brewery and something I can’t remember from Otley were all excellent. Half the fun was in seeing what beer might be on offer next.

There was pretty good entertainment too, a real set of “turns” that felt very much in the spirit of the occasion of celebrating a pub with old-school values. I was rather taken with the jazz band Sixth Sense, who despite looking barely old enough to be served in a pub, conjured up a sound that took me to a velvet-lined lounge bar on an exotic resort in the 1950s. This was quite achievement considering I was stood in the rain on the pavement, with a very smelly river running behind me.

Great pubs serve great beer. But really great pubs are about a lot more than that. They foster a sense of community and belonging. They feel like a home from home, but don’t just ration that feeling for the regulars. They make a town a better place to be. The Penny Farthing does all that, just two years in. I look forward to what the future holds for the place and hope there are many more birthday celebrations.

4 Comments to “Happy Birthday to The Penny Farthing”