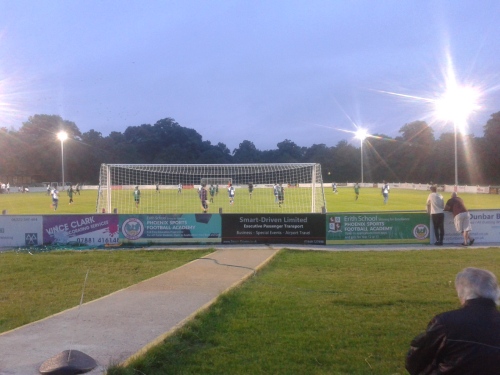 Thank goodness for Proper Football. Cup finals and international tournaments are all well and good as spectacles but they aren’t real football. My ideal match doesn’t take place in a gigantic stadium, it isn’t soundtracked by piped-in hi-energy crowd-directing tunes, isn’t played by players cynical and skillful enough to squeeze the joy and unpredictability out of the game. My ideal match takes place in the sort of ground I can wander around, can enjoy a pint in, where I can queue for a burger and watch the match simultaneously, where the smell of the onions is coupled with the spray of Deep Heat, where the soundtrack is a panicked cry at a dawdling centre-half, a grumble from the touchline, a kid kicking his own ball against a fence, oblivious.

Although, of course, this game isn’t Proper Football either. Not quite. The pre-season friendly. Generally the drizzle after the drought, rather than the downpour. There isn’t the urgency of the real thing as nothing is really at stake, at least for the supporters. Something more for the players, I guess, a place in the team when things do matter. It is all a little haphazard. New players failing to gel. A flurry of substitutions. “It’s not about the result”.

But it is still football. And those new players offer a glimpse of what might be, which depending on their performance may or may not be a good thing. And it is an opportunity to get back into the rhythm of Going To The Football. This is a workout as much for the supporters as the players. I’m not sure my walk to the ground was my best time. My clichés needed a bit more work, but I’m pleased I struck up a conversation with another bloke in order to give those clichés an airing. I timed my visit to the tea bar perfectly, which bodes well for next season, although the fact I’d forgotten exactly where it was wasn’t the best start.

Phoenix are geographically my closest club. Erith the club closest to my heart. I started off fairly indifferent as to who won or lost, partly down to divided loyalties, partly down to pre-season games not mattering. But Erith soon became less “them” and more “us”. However, I suspect Phoenix would be “us”, to at least some extent, against any other team.

As for the game, Phoenix were sharper, as you might expect for the club a division above the other. They were quick, not just in the sense of running faster, but in terms of decision-making too. The ball was moved on more swiftly, the runs picked out sooner, the shots taken rather than pondered.

Erith were, however, stronger. Their front-line were massive. And not in an out-of-shape way, more in a proper force of nature way. They cannot be tackled, only circumnavigated. And as such they kept hold of the ball, came away with it when they appeared to be closed down and hemmed in, and generally were the proverbial Handful.

It was funny watching an evening game in the summer, a game which kicked off in daylight and ended in the deep purple of evening. There will be much the same in a few months, in terms of light, just the kick-off will be 3pm, not 7.45pm. By then I won’t be in shirt-sleeves, and won’t end up covered in insect bites.

But this was pretty close to Proper Football and I’m so glad it is back.