Dartford, the death of a high street and the awkwardness of wandering around a town taking photos

On Sunday I found myself in Dartford. I hadn’t planned on being there, but as I made my way into the town I thought I’d take a few photos on my phone. 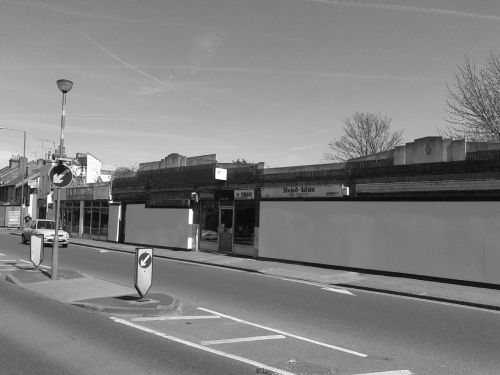 I entered the town from the south, making my way up Lowfield Street. This street was once a busy street, full of shops. Ten or so years ago Tesco went about buying everything up, promising to level the place and build a new store, to reinvigorate the area, bring jobs, regeneration, all that stuff. They recently decided against that plan. So, now Lowfield Street is made up of mainly boarded-up shops and derelict buildings. This is the Death of the High Street and the Evils of Huge Corporations and all those other Capitalised Wrongs in action.

Dartford was always going to suffer for having one of Europe’s largest shopping centres down the road. Again, the Death of the High Street in action. But there is always a place for local shops. Until they are bought up and left to fall apart, I guess.

I felt a little odd pointing my camera at hoardings and boarded-up windows. I took a photo of a St George’s flag fluttering in front of a block of flats. It felt like a cliché. Taking photos in black and white felt clichéd too, like I was labouring the point. Or maybe even manipulating what I saw. It was a beautiful day with a clear blue sky, and here I was making the place look drab and gloomy.

A few people passed me by and I wondered what they made of me. Here we go. Another bloke wandering around taking photos of our road looking a mess. I bet he will stick those photos up on some daft little website. He’ll probably try to say something profound about it. But it has all been said before. Just another bloke hoping to gain web-hits from a town’s misery. He probably calls himself a flâneur, models himself as a practitioner of psychogeography or some other vague non-discipline. He thinks wandering about wallowing in other people’s unpopular places is a meaningful activity, a profound one. Tourist. Twat.

They probably weren’t thinking all that. Or maybe they didn’t notice me at all. Everyone takes photos of everything these days.

There was something a little eerie about Lowfield Street. It might have been the unseasonably warm weather, that made me feel like I’d wandered from a cool, grey spring morning into the height of a summer’s afternoon. It might have been the time of the week and the time of day. Sunday afternoons are quiet everywhere, right? Every shop was closed, but I suspect that one or two are still in business, they just don’t open Sundays. One or two properties looked like they had been re-purposed for storage. It was hard to tell with some buildings whether they were in the process of being pulled down, or being patched up. Neither standing nor not standing.

Many of the buildings are pretty old. Even boarded-up and falling down they offered a glimpse of the town’s past. This is how Dartford was once. I’m not completely against redevelopment, but there needs to the promise of something better replacing what went before. I don’t think that happens often. A row of shops still seems a better experience than a generic retail barn.

I made my way into the town centre. There was bunting and people milling about and a lovely view down to the old church. There are moments like this when Dartford feels like a real, distinct town, rather than a blighted suburb, a non-place, a lost place. There is still the promise there. Just. Sadly, it is probably not in the boarded-up Lowfield Street. But it is still there. Somewhere.

3 Comments to “Dartford, the death of a high street and the awkwardness of wandering around a town taking photos”