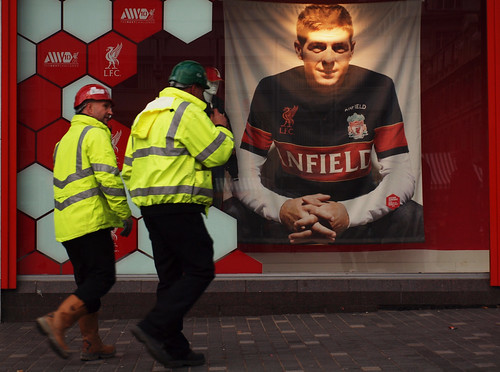 Supporting a football club is an act of faith. You believe in the club, often despite plenty of evidence to suggest you shouldn’t. You trust the club with your happiness every weekend, often despite many a miserable Saturday or Sunday night. You hope that your club will improve, will succeed, will reward your faith.

But sometimes you can’t rely on faith alone. You need a moment that affirms your faith. A moment that gives you reason to keep believing, to keep trusting, to keep hoping.

Over 16 years Steven Gerrard gave Liverpool supporters many of those moments. A performance to turn around 0-3 to 3-3 and a European Cup. A last minute equaliser in a Cup Final. Countless vital penalties, or outside the box screamers, or just games where he seemed to be the whole team, leading them to victory.

The faith in the club came from the belief in the player. Over much of this time the team wasn’t good enough, forever in the shadow of great Liverpool teams from the past, and often eclipsed by the teams they faced in the present.

Yet here was one player who made it all worthwhile. A player who could punish any team in the world with his skill and vision. A player who could also turn a game around through sheer force of will. We as football supporters hope for excellence in our players, but demand unstinting effort. Gerrard was able to offer both. Not many can, or will.

He was certainly not without his failings. His ability to take a game by the scruff of the neck was his greatest strength but also perhaps his greatest weakness. For every game won with a 30 yard thunderbolt there was a game ending in frustration as he tried the impossible and failed, the thunderbolt ending up in Row Z, the 50 yard pass going off for a goal kick.

But perhaps that weakness was down to the teams he was part of, teams that never really matched up to those in the past. Great players passed through the club, but only on occasion did a group of them stick together and play together. Liverpool over the past 16 years have always been a good team who are a few players short of being a consistently great team. Gerrard held the team together, often helped the team overachieve, but perhaps that led to his failings too.

However, has there ever been such a Liverpool ‘great’ who has played in such questionable teams? Dalglish and Rush got to play in all-time great teams. So did Hunt and St John. Gerrard perhaps never had that opportunity, except for the odd flash in 2001, 2014, maybe the odd other year. Gerrard may not be Liverpool’s greatest ever, but I’m not sure he ever had the context to ever be so. And perhaps the fact that he didn’t have those advantages makes him an even better player than I might have first thought. It is one thing to be a great among greats, another to be called on time and again to carry a team.

It is worth remembering when he had great players to work with though. As much as the Steven Gerrard Highlight Reel is full of moments of individual brilliance, I think his most satisfying moments were when he brought the best out of others, and they the best out of him. His interplay with Fernando Torres, and then Luis Suarez, was a joy to watch. Seeing him run the midfield with Xabi Alonso and Javier Mascherano was pretty special. Even thinking back to the days playing with Michael Owen, or Robbie Fowler, there was that certain something. He could be a great team player as much as in individual.

16 years at one club, 12 as captain. That doesn’t really happen anymore, does it? The hometown boy becoming a leader and, dare I say it, an icon, a legend. All too unbelievable these days. But that is what gives you faith in football. That this still can happen.

That there can even be a debate about a player being ‘legendary’ these days feels like a miracle. The fact that the debate will be so heated and divisive just shows what an interesting player Gerrard was and is, and shows that football is still worth caring about, that the legacy of players and teams can still generate passion. Not everything is sterile. Not yet.

Is he leaving at the right time? Maybe. The sentimentalist in me would have liked a different departure, or for Gerrard to retire but stay on at the club as a coach. But I think he is making a good choice moving to the States for one last hurrah, a new experience and adventure for him and his family. He will be leaving the club under his own steam and without tarnishing the view the supporters have of him by hanging on too long. To leave anywhere on your own terms is a good thing.

He owes the club nothing. Should he ever return, as an ambassador, coach or manager it will be easier for having a break from the club. Some distance won’t hurt him, the club or the supporters. The hero may yet return. He may not. But either way there is nothing left to say but thank you – thank you for keeping faith in Liverpool Football Club, and thank you for restoring our faith in the club and in football itself.

5 Comments to “My Captain”