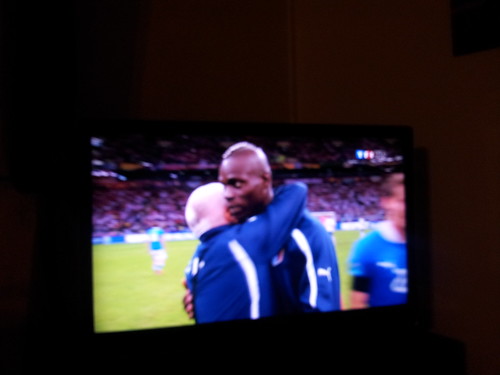 So, Mario Balotelli is all set to join Liverpool. First, let’s get the serious thoughts out of the way…

£16 million for a proven goalscorer who is still only 24 years old appears to be a bit of a bargain. He is capable of moments of brilliance, and is genuinely unpredictable, an important trait Liverpool were appearing to lack post-Suarez. That unpredictability may veer into some pretty poor behaviour, but it is not guaranteed to.

Liverpool have shown that with Brendan Rodgers’ managerial style and the work of sports psychiatrist Dr Steve Peters they can help make ‘difficult’ players less so. They can keep the unpredictability productive.

It is easy to forget that Suarez had his most productive, trouble-free season before leaving the support network of Liverpool to go bite-crazy at the World Cup. It is even easier to forget that there were plenty of question marks over Daniel Sturridge’s temperament and attitude before he joined the club.

If any club can rein in Balotelli’s more destructive urges, Liverpool can. They might not, but maybe it is worth the risk – while it could be a disaster, Balotelli may have more ‘upside’ than any other player available for a similar price and a similar wage. If Liverpool want to compete this season, they probably have to gamble on players like Mario.

But let’s not get too serious here. Mario Balotelli should be welcomed because he is a daft sod. Football is far blander than it used to be, there aren’t many real characters around. Balotelli may do some stupid things, but he has also created this weird mythology around him.

Did he really pick up a truanting lad and take him back to school to confront the bullies? Did he really throw a load of money behind a bar for supporters to celebrate a win? Did he really break in to a women’s prison just to see what it was like? Did he really dress as Santa and hand out money to passersby? Fireworks in the bathroom? Really?

Does it even matter if some, or all, of these are true? Just the fact that these tales exist is enough. Here is someone with that oft-misused word, personality. I want footballers worth caring about, players who can generate real emotions, both positive and negative. That is what makes football fun.

Players like Balotelli can be hugely frustrating, but can also bring a joyful recklessness to the closely managed, sterile ‘industry’ that is football. That unpredictability is what makes him brilliant and what makes him a pain in the arse. It is what makes him so watchable, even if you are watching through your fingers.

He could become an Anfield cult hero. He could win Liverpool trophies. He could do something incredibly stupid and find himself out of the club by Christmas. Considering his past record with fireworks, I worry that he won’t make it past Bonfire Night.

But whatever happens, it is going to be entertaining to watch.