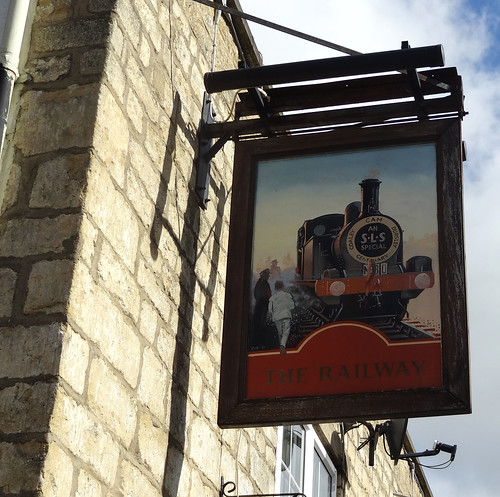 The Missed Train Pint turns an inconvenience into an opportunity. Missing a train can be hugely frustrating. A delay is never welcome. And train stations are rarely good places to hang around in for any length of time.

Yet, if there is enough time, the missed train buys you a few extra moments to explore where you are before you leave. Train stations are often on the edge of town, so a wander around the shops or a quick visit to a tourist attraction is an unlikely option, unless you fancy missing the next few trains too.

But most stations have a pub close by. Some even have a pub inside the station.

Pubs by, or in, stations have traditionally been horrid places. Their trade is people who don’t really want to be there, but are on their way somewhere else. Patrons are unlikely to visit again, so there is little motivation to create a good impression if repeat business is not an option. What weird locals would drink at a station pub when there are better places in town?

But to the intrepid Missed Train Pub drinker this doesn’t matter. If you’re not planning on staying long it is worth risking a dodgy pub and an iffy pint. The worst case scenario is an unexpected drink that doesn’t quite live up to expectations. The best case scenario is a hidden gem of a pub, or a never-experienced drink.

And now station pubs are improving. I guess some landlords are just beer enthusiasts you have worked out premises near stations rather than town centres are cheaper. Plus, many station (or near-station) pubs got so awful even the most desperate wouldn’t drink in them, and someone better took over.

Essentially, things have never been better for the Missed Train Pint drinker. You might find a weird and wonderful pub that has been around forever, or the latest hip craft beer emporium. Either way you are guaranteed an experience, and a tale to tell, to go along with your cheeky pint.

And, oh the joy of that pint. The best drinks are the unplanned ones. Plan a drink and it is doomed by the weight of expectation. Happen upon an expected drinking scenario and it is nearly always a bonus, a boon, a benefit. It brightens up a day.

If you are at the start of a long trip the Missed Train Pint fortifies you for the journey ahead. On the way home? Then reminisce over one last drink. The Missed Train Pint extends the beautiful prelude before a journey, or the wistful end of one. It is a chance to steal a few seconds and take stock about where you have been or where you are going. It makes the trip as important as the destination.

And the journey doesn’t even need to be a special, or exotic, one. The Missed Train Pint is just as wonderful if you’re commuting home. Rather than be annoyed and frustrated that you can’t get home after a hard day’s work, the Missed Train Pint lets you unwind, mull over the day, and get a little perspective over whatever terrible excuse the train company has come up with on that particular afternoon.

It is important that I make a distinction here. This is much more fun than ‘after work drinks’, as you get to spend a little time alone, or with people you want to, rather than the folk you are stuck with for 35+ hours a week.

And I guess the final thing to say about the Missed Train Pint is that it is finite. There will be another train. One you really ought to catch. As much as there is fun to be had in a twelve-hour bender, there is also something pretty good about a quick pint (or squeezing in two) and then heading off. You can appreciate the pint, appreciate the place, but acknowledge that it is time to go, time to go somewhere better. Maybe time to go home.

3 Comments to “The Missed Train Pint”