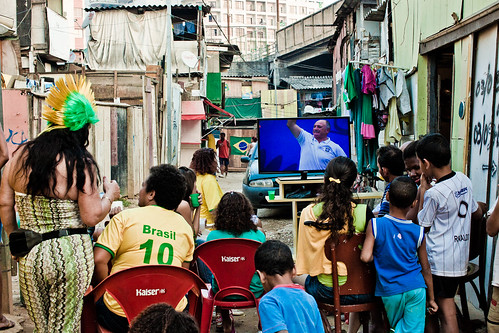 Well, the past few evenings have been fun haven’t they?

We had Nigeria/Iran – a game people will hold like a badge of honour in years to come. They will shake their heads and through their thousand yard stares share war stories of the worst game of the World Cup. Every tournament seems to have that one game. Amid the festival of football, this game brought us back down to Earth, made football mortal again. This was the sort of football many of us put up with week in, week out. Teams not wanting to attack against teams incapable of attacking. Wayward passing, iffy tackles, the drift to an inevitable and unsatisfying conclusion. In many ways this was real football, this is what we’ll all return to in August. Thanks for the reminder Nigeria, thanks for the reminder Iran.

Then we had Brazil/Mexico. Mexican goalkeeper Guillermo Ochoa was the hero of the hour in a very different sort of goal-less draw. Mexico were organised and resolute. Brazil still don’t look like world-beaters. This was genuinely compelling stuff – Mexico raising their game against the hosts, Brazil failing to channel the rabid enthusiasm of their supporters. Brazil will face one of Chile or the Netherlands in the next round. They will have to improve, and be a little less reliant on one or two players, if they want to progress. They need a little more steel and organisation in midfield, and a few different creative options than Neymar and Oscar. If those two can be neutralised (a big job, I know), Brazil are there for the taking.

There’s been a lot of hand-wringing about this being the end of an era for Spain. While this is almost certainly the last World Cup for some of their players, Xavi, David Villa etc, I think this is probably an over-reaction. Spain haven’t suddenly become a bad side in two games. They still have a great squad, and enough younger players to maintain Spain’s position as one of the world’s top sides.

This wasn’t just a Spain collapse. They are in an incredibly difficult group. The Netherlands were particularly underrated going in to the tournament, and in Van Persie and Robben have two experienced match-winners who will give any side trouble, and are unlikely to be phased by anyone they face. 5-1 was a bit of a freak result, Spain were not used to going behind like they did, chased the game in an unfocused way and left themselves open to further attacks.

Chile are an excellent side. They were clearly well-drilled, well-organised and had the perfect game-plan, pressing all the time so that Spain didn’t get any time on the ball, and then taking their chances when they appeared to them.

Neither result was impossible, and was a little more likely than we all thought. Plus, take a look at Spain in previous tournaments and you’ll see a glut of 1-o victories. They have a blueprint for winning, and when it went wrong at this tournament they struggled for a Plan B.

Football seems to be getting quicker, and pressing and counter-attacking are more vital than ever. That takes a younger side than traditionally needed. Or at least a less tired side. The Spanish players have had long club and country campaigns for several years now. They looked tired mentally and physically.

This wasn’t Spain at its best, but that doesn’t mean we should see this as the end of Spain as a dominant force. Instead, they have suffered from a particular set of circumstances – a tough group, tired players and games not going how they usually do for Spain. There will no doubt be a period of transition, in terms of players certainly, and maybe tactics. But don’t write them off just yet.