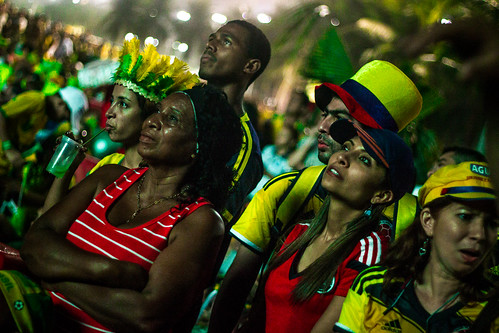 And so the World Cup begins. An interesting start.

There were some glimpses of the greatness Brazil might yet achieve, with some fine moments from Neymar and Oscar, yet on the whole Brazil looked rather beatable. There were a fair few stray passes and stray challenges that could see them punished by a better side than Croatia.

Croatia meanwhile showed a blueprint for facing Brazil – if you can stay organised in defence and midfield then you’ll have a pretty good chance of punishing them on the break, particularly if you attack the full-backs. If Croatia had been a little crisper in the pass, had lingered a little less on the ball, and if Mario Mandzukic hadn’t been suspended then I suspect they would have a little more joy.

However, this is only Brazil’s first game and with the hardest group game out of the way they have plenty of time to iron out any problems.

But the real story was the performance of referee Yuichi Nishimura. Croatia had every right be as upset as they were about his decision-making – a very soft penalty, a goal disallowed and a lenient take on Neymar’s stray elbow being the key incidents. The flourish with which he awarded the penalty and waved a yellow card didn’t help.

It is easy to shout ‘Conspiracy!’ when this sort of thing happens, when so many decisions go the way of the host nation, in their first game. And usually it is easy to rubbish those claims. Referees are far more likely to be incompetent than corrupt. There is every chance of them showing bias subconsciously in front of a particularly partizan crowd, but proactive bias in unlikely.

The FIFA corruption scandals have shown the top brass there are willing to go to great lengths to get what they want. FIFA will always want a successful host nation as that makes for a better tournament. While I doubt the referee was given a brown envelope stuffed with banknotes, would he have had the wants and needs of FIFA in the back of his mind? Would anyone have taken him to one side before the game and made sure he knew about those priorities? Probably not, yet the current cloud hanging over FIFA makes any conspiracy theory or similar seem just a little more plausible.

Either way, Nishimura’s performance soured the first game a little. But at least we’ve got spray-painting refs and huge wristwatch substitute boards to keep us entertained if the officiating remains dodgy. They’re great, aren’t they?