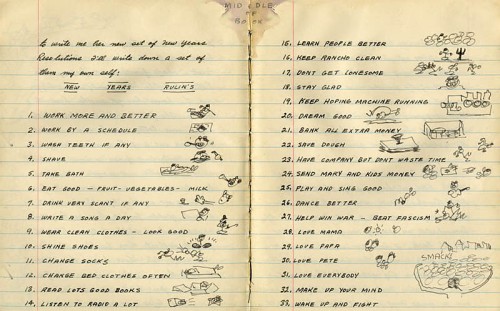 Then, I realised that the depths of winter really aren’t the best time to start a healthy eating regime (who wants salad when it is snowing outside?), a new fitness programme (who wants to go running on damp, dark mornings/evenings?) or pledges of sobriety (January is a grand time to go out drinking as all the amateur boozers who make going out at Christmas so painful are nowhere to be seen).

Plus, there is that risk that any resolution-ary activities just seem a little pious. Or perhaps I just have a fear of self-improvement. First, as this requires an acceptance that I need improving. Secondly, it soon becomes evident that accepting that is a whole big can of worms to open. Thirdly, even if I do get to whittle down the ways I could improve to a manageable list, the thought of failing to improve isn’t much fun. Who really wants to deal with a whole bunch of unresolved feelings of self-importance/self-doubt/self-pity? And in January?

However, I suspect that undertaking resolutions need not result in a descent into horrible self-absorption followed by self-loathing when you inevitably fall short. And in such a spirit, I thought I’d attempt to draft some rough resolutions to aim towards in 2012.

It is perhaps worth noting here that these are pretty broad brushstroke resolutions. There may (or may not) be more defined or detailed resolutions lurking in my head that I really don’t want to blog about as:

So, without further ado (and maybe there should be a resolution about fewer posts starting with padding like this, and while we’re at it, less parentheses) here goes…

On the one hand I’d like to blog more – I’ve fallen short of the 100 post mark two years running, it would be a minor achievement to reach that mark, and would be good fun to try to get at least two posts out a week. On the other hand, I’d like to spend more time on writing something decent, rather than just spewing out any old nonsense that comes into my head.

I’m sure there is a happy medium. So, I’ll try to post more, and accept that blogging can (should?) have a certain immediacy and needn’t be edited to within an inch of its life. But I’ll also attempt to write some stuff with a little more thought and attention – this may never see the light of day, but I don’t think it would hurt to push myself to full writing capacity now and again to see what I’m really capable of, or not, as the case may be.

I have a big pile of unread books. I have also have plenty of longform article/essay-type things to read. I shall aim to spend less time reading free newspapers/sports sections of newspapers/Twitter/backs of cereal packets and more time reading the good stuff.

I shall also try to limit time playing games on my phone/watching crap TV/staring into space wondering what to do – while accepting that nobody really spends every waking hour with their nose in some work of literary genius and it doesn’t hurt to switch yr brain off from time to time.

I’m making progress with this – but the quest continues. Rather than drinking lots of average stuff, I’ve steadily, over the years, moved towards drinking better booze, in smaller quantities. This seems to be a generally rewarding strategy. I don’t think I could ever go for the full sobriety option, but the more sober days I can aim for, the better, I reckon.

See “Drink better” above. I should try to exercise more too. I think it is probably more sensible to start small with this, rather than cook up grand fitness plans only to fail miserably the first week of February. Oh, and I should probably eat less crap too.

Working on internet-y things all day, and the general information-overload-cultural-whatever has played havoc with my attention span. I shall work to rewire my brain, or something. I forget. Now, what’s happening on Twitter? And what’s that song playing? And when does that programme start?

Oh – and a very Happy New Year to you all – if I’m not too late with that.

Image from the Woody Guthrie Foundation