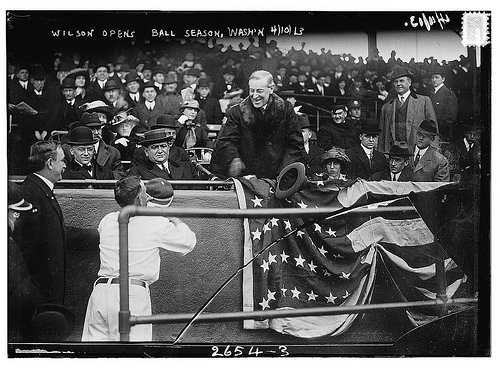 This place started out as a blog about sport. I pretty quickly realised that I didn’t have anything interesting to say about sporting matters, so I decided to broaden the focus of the blog, as I had nothing interesting to say about lots of other things too. Still, the lack of sporting posts doesn’t mean that I don’t like sport anymore. Far from it. One such day of excitement is baseball’s Opening Day. END_OF_DOCUMENT_TOKEN_TO_BE_REPLACED

The Art of Fielding is quite a lovely, comforting book. In many ways it was the perfect holiday read this summer. In many ways it should have been my perfect book – easy-to-read mid-brow fare, feted by the likes of Jonathan Franzen, giving some sort of insight into the human condition, and fundamentally all about baseball. And yet something was lacking, something wasn’t quite right. END_OF_DOCUMENT_TOKEN_TO_BE_REPLACED

First in an occasional series of ill-considered, ill-thought out musings on the baseball season. Y’know, to keep the post count up and stuff. END_OF_DOCUMENT_TOKEN_TO_BE_REPLACED

So, after a brief hiatus I thought I’d quickly post to mark Opening Day. That is, the first day of the new baseball season. Well, that is discounting a couple of games that took place in Japan last week and a game in Miami yesterday, but still, let’s not be picky. Everyone else, including my team – the Mets, are starting their season today. So Opening Day it is. END_OF_DOCUMENT_TOKEN_TO_BE_REPLACED

I read today an interesting article in the Financial Times on the portrayal of sport in fiction. The main argument of the piece is that American authors have never been afraid to tackle the subject and have covered sport extensively, and well. Meanwhile, British authors have been far less inclined to cover sport in fiction, and have been far less convincing when they’ve tried. Reading this piece alongside an article from the Observer covering similar ground a couple of years ago, has left me wondering about sport in fiction, and how sport could work in British fiction. END_OF_DOCUMENT_TOKEN_TO_BE_REPLACED