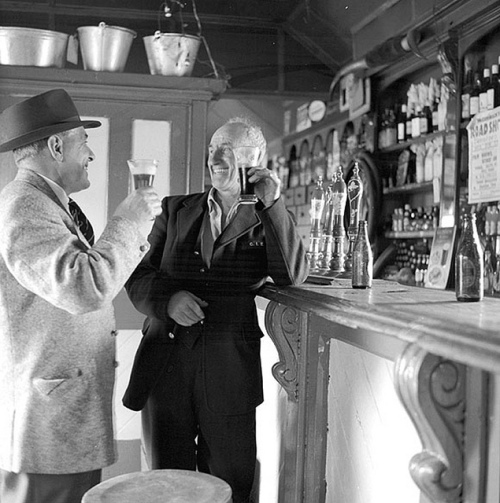 This is an exercise in pub Mass Observation, as part of Boak and Bailey’s challenge for The Session, asking bloggers to “take a notebook to a pub or bar — any one you fancy — and write a note of what you observe”.

Craft beer bar, or I guess pub, situated in London, just north of the City. An old corner pub, a rectangular room with the bar taking up the majority of one of the long sides. More seating upstairs, but this was not observed.

At 12.45pm there were around a dozen people in there drinking.

Those seated were three colleagues, two male and one female, in their 30s. The men drinking halves, the woman drinking a red wine. One male in his 50s, alone, drinking a half. A man and woman in the 30s drinking canned craft beer, poured into glasses. Three men in their 40s, all dressed very casually, all on pints, all with the general air of men who enjoy Proper Beer. Four men in their 40s, all in business casual, all on pints. Five guys in their twenties, young creative types, all on pints, with cask as popular as keg. Apart from the Proper Beer Pilgrims it appears everyone is drinking with colleagues.

More wander in and out after 1pm, with a steady flow building to a busy bar. The observer lost track of them so stopped observing. There did seem to be a lot of young men with beards.

There were a dozen beers on cask, around 20 on keg, with a few ciders too. Many bottles and cans available plus the usual spirits. All the beer would fall under the real or craft beer banner, including some of the fairly usual craft suspects and some more unusual too, but mainly UK-based.

There are three people behind the bar, two men and one woman, all in their 20s. They are generally cool and friendly and young and all that stuff.

Variations on pork pies, pork scratchings and crisps are available. They are all on the craft-y side too. The pies are under a glass dome, the scratchings in glass Kilner jars. I see one person order the scratchings and the bar staff put on one of those blue catering gloves for handling them, squashing them into a ceramic ramekin.

Everyone is chatting, apart from the woman with her two colleagues as they walked out for a moment. She plays with her phone until they return. The man on his own left soon after the observation began.

The acoustics of the room and the positioning of the observer make it difficult to hear and record individual conversations. However, the variety of beer on offer seems a big subject when people arrive.

The room is full of dark wood and burgundy leather. All the tables and seating are raised, at bar stool height, mainly skirting the outer walls of the room. There is a large, etched mirror at one end of the room for Charrington’s Celebrated Burton Ale. A crystal candelabra hangs from a panelled, mirrored ceiling. The walls are olive-green, the floor wooden. The decor suggests a tasteful restoration, rather than a complete overhaul.

There is no TV, or any other entertainment, electronic or otherwise. Soul music plays, but is hard to hear above the conversation. Each table has a pile of bar-branded beer mats and a leather-bound beer menu.

As the bar fills I notice that at least one person is drinking gin and tonic and one has a Coke. But beer is the main drink of choice.