Neither here nor there – The ‘Nearly Places’

A ‘ghost estate’ refers to an unoccupied housing estate. The term has been used, and seen, widely in Ireland. The ‘Celtic Tiger’ years from 1995 to 2008 saw a huge amount of economic growth in Ireland. This led to a housing surplus, made much worse with the global economic downturn from 2008 on. There were a lot of houses, and nobody willing or able to buy them. 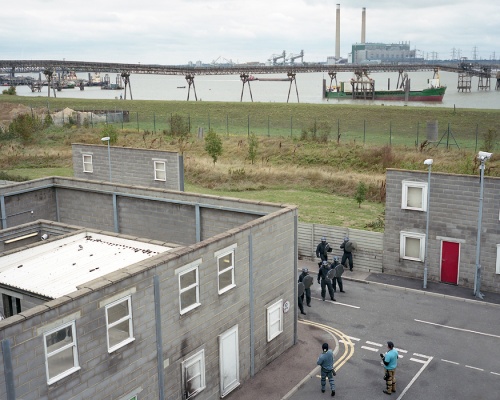 The Specialist Training Centre is in Gravesend, Kent – just outside London, and right on the River Thames. Within the centre is a mock town, built to enable police officers to train for any potential future civil unrest. Riots are staged, and police gain experience on how to deal with them. You can read more about it here.

North Brother Island is an abandoned island on the East River of New York City. It was once the home of a smallpox hospital. It is now a bird sanctuary, and the public are not allowed to visit.

Yet they are all ‘nearly places’, places that might appear to be normal at first glance, but for whatever reason are not quite there in the way they should be. Each place feels uncanny in its own way.

The ghost estate looks more like a toy town than a real place, doll’s houses rather than homes, all too perfect and new. Yet they are often surrounded by overgrown foliage rather than manicured lawns, ripping the picture-perfect homes even further away from reality and expectation.

The ‘riot town’ is creepy – here is where the establishment prepares for keeping the masses down. Or even if your politics don’t follow that interpretation, the mere presence of such a facility makes us realise how close we are to societal collapse at any time. Either way, it is very unsettling. The shop and house fronts with nothing behind them give the place the appearance of a movie set. We understand the idea of a movie set as well as we understand the movies themselves, but seeing something like this is odd – the real and fictional muddled, conflicted. That these are normal streets, with fake yet believable pubs and shops, only adds to the strangeness.

North Brother Island gives us a glimpse of a future without man. It brings our own mortality to the forefront – that where we live and where we work will one day be ruins, and we’ll be long gone. The real weirdness comes from this being so close to New York, that any place can go to seed, literally, even somewhere so close to one of the most powerful and expensive cities in the world. After seeing North Brother Island nowhere appears permanent.

I guess each of these places are sad, in their own way, but maybe they are instructive. We can learn about real places from these ‘nearly places’. We can learn of folly, or of impermanence, or of the uncertainty we face each day. These places give us an insight into human behaviour, not only in how they came about, and how they are now, but maybe in how we react to them too. I guess the risk is that they are reduced to kitsch look at this cool place platitudes or similar. But maybe that says something too.

Either way, I’m glad the photographers shown above, and many more like them, are chronicling these places.

4 Comments to “Neither here nor there – The ‘Nearly Places’”