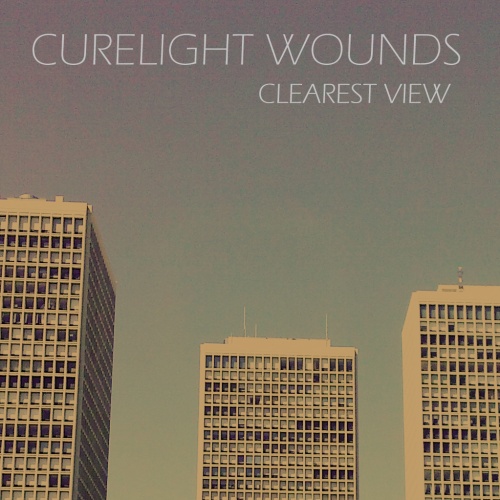 A quick and dirty review of a quick and dirty EP from new Brooklyn band Curelight Wounds. Naturally, as a prematurely middle-aged Londoner I have my finger on the pulse of the Brooklyn noise pop scene. Or…full disclosure time…they actually got in touch with me via this website’s Contact page with links to their music and a blurb about it.

And that blurb included: “Clearest View is structured, yet full of raw one-take drums, guitars written on the spot, and distorted vocals- a tonal stream of conscience.” So, it seemed apt to listen to the EP a few times and throw out a one-take stream of consciousness with a few thoughts, considerations etc. This might be less fun for you, the reader, but it is both an appropriate response in my view and also a good incentive for you to just scroll down the page and listen to the EP yourself.

The EP is all early 90s distortion and sort-of-shoegaze and there’s some nice melodies lurking in there and a fair amount of potential that the band might go on to do something really interesting. Gates (with a vaguely New Order/Cure/early 80s alternative-y riff) and Square (more garage-y) are more immediate, while the final, longer, title track might need a few more listens to unpick and appreciate.

A three-track EP is perfect for this kind of music – this kind of tone over a whole album might get a little tiring/tiresome and it would be easy for each track to blend into the others. Yet over three tracks and ten minutes it is a lot of fun, evocative of a few of those musical touch points from the 80s and 90s yet also the kind of noisy pop that will just drown out your day in a good way without needing further analysis. Certainly not the pseud-y analytical bollocks I’m churning out here. I now know why I distrust stream of consciousness.

Anyway, a couple of other points.

One, I really like the idea of a band just writing some tracks, recording them and getting them out there. As much as there is value in rehearsal, honing craft and all that jazz there is something democratic, liberating and punk about just throwing songs out into the ether and seeing what people think. Especially with this kind of music, that is better for being rough around the edges, imperfect. I hope they now experiment, take risks, make mistakes, and that we get to hear them.

Two, I felt a little odd (and strangely honoured) having someone from out there in the real world getting in touch and plugging their music, presumably in the hope I’d then write a post like this one (or write a different post, but you get the point). There is probably more to be said on this matter, around the-real-world-and-semi-anonymous-internet-world-intersecting but that is another post for another time. I can confirm that there were no incentives/bribes/payola offered here. I am full of integrity. Until I get offered a bunch of free stuff.

If you’ve got this far, you can listen to the EP here: