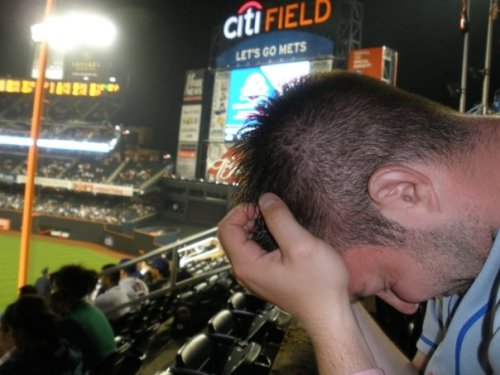 My name is Steve. And I’m a Mets fan.

I feel this confessional tone is kind of appropriate. A while back I told an American friend that I followed the Mets, to which she shot me a look of pity and said, “Once you’re a Mets fan, you’re always a Mets fan.” She gave the impression that supporting the New York Mets is a little like herpes. It’s a little embarrassing, a little unpleasant, and never really goes away.

This week, after a horrible, injury-ravaged season, the Mets were finally put out of their misery. They cannot now qualify for the post-season play-offs and a shot at the World Series. It’s just no longer mathematically possible. In the wild card standings there is even a nice little E for eliminated next to their name, just to confirm this.

Now, I’m not for one second suggesting that I’m forsaking the Mets. I wouldn’t, even if I could. However, I would like to follow the play-offs in more than a purely neutral way. Sport is just more fun that way.

I could quite easily do this by identifying who I don’t want to win and supporting whoever they are playing against. That might work on a game-by-game basis, but isn’t that satisfying.

So, I’m going to narrow things down and work out who (in the absence of the Mets) I’d personally like to win the World Series.

Immediately, I can throw out the traditional rivals of the Mets. Goodbye Yankees, Cardinals, Phillies and Marlins. The Dodgers and Giants can be thrown out too, for abandoning New York in the fifties. The Los Angeles Angels of Anaheim is such an unwieldy name that I don’t want to follow them (sorry, this isn’t going to be an article full of rational criteria). Boston are too much of a big side, it wouldn’t feel right at all rooting for them.

By my reckoning that leaves the Detroit Tigers, Texas Rangers and Colorado Rockies.  Here I suppose I’d better get more positive with my selection process.

I’ve been to Texas. I have a Texas Rangers baseball cap. They are, perhaps, my American League team, when I think about it. If a Mets game isn’t on, I’ll watch Texas. OK. Easy.

Or is it? Texas are by no means a certainty for the play-offs. Maybe I’m hedging my bets, but I want some cover in case Texas don’t make it. They can be my American League surrogate team, sure. But Colorado are my National League surrogate team. I put a sneaky small stakes bet on them to win the World Series a couple of months ago at 100-1. It is certainly in my financial interests for Colorado to win. Sorry Detroit, you miss out.

There you have it. The Rangers and Rockies are who I’m rooting for. Until next year, then I’m returning to wishing and hoping on the Mets.

Have I been a horrible mercenary with this exercise? Should I just remain neutral in a Mets-free post-season? How do you act when your team falls out of the reckoning – in baseball, or any other sport for that matter?

Photo by Michael Mase. That’s not me in the picture, by the way. I just thought it was an apt image.